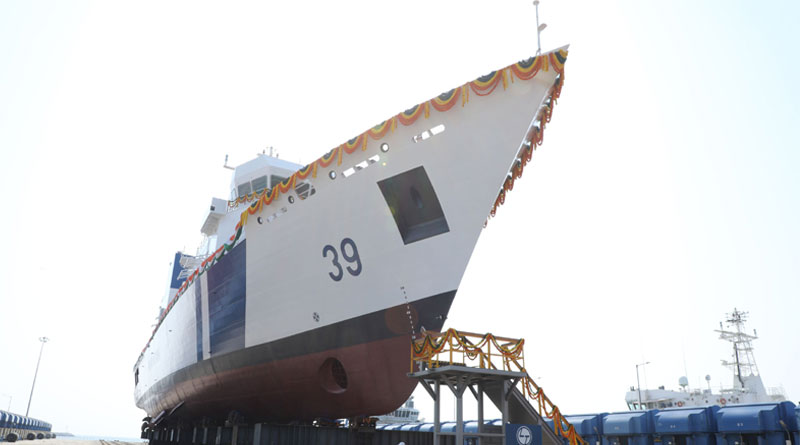 The seventh Coast Guard Offshore Patrol Vessel (OPV) was launched on 6 October at L&T Shipbuilding in Kattupalli near Chennai. Dr T V Somanathan, IAS, Secretary (Expenditure ), Ministry of Finance was invited as the chief guest for the event.

The OPV launched is the last of the series of 07 OPVs being built by L&T Shipbuilding under the contract signed between Ministry of Defence and L&T, Ltd on 30 March, 2015. It was the first time that the contract for building an OPV Class of Vessel was awarded to a Private Shipyard, i.e. Larsen and Toubro, Ltd in line with the Government’s ‘Make in India’ policy. The 7th OPV that was launched is likely to be inducted into Indian Coast Guard in March 2021 after completion of extensive trials and testing for the equipment and machineries fitted onboard.

The length of the OPVs is 98 metres and breadth 14.8 metres with gross tonnage of 2100 tons. The endurance of the vessel is 5000 Nautical miles at cruising speed.


The cruising speed of the ship is 12-14 knots and maximum speed of 26 knots can be achieved. The ship will be fitted with indigenous 30 mm 2A42 gun and two 12.7 mm gun. The ship has been designed to carry integral Twin Engine Helicopter which will enhance its operational, surveillance, search and rescue capability.

The OPV would be utilised for day and night patrol/ surveillance along with anti-terrorist/ anti-smuggling operations in Exclusive Economic Zone (EEZ) and Coastal Security. The Vessel will have two Navigation Radars and ultra-modern technology including sophisticated navigational and latest communication system which are capable of operating in tropical conditions.

The expected life span of the ship is more than 25 years. The ship would be manned by 102 crew, including 14 Officers and 88 Subordinate Officers and Enrolled Personnel.

A statement from Indian Coast Guard pointed out, “Despite the restriction and constraints faced by Industries across the world due to COVID-19, the coordinated efforts of ICG Overseeing Team with L&T Shipbuilding have resulted in timely launching of the Vessel. This milestone will ensure timely delivering of the Vessel to ICG which is the need of hour in today’s existing security scenario.”

In his speech, Dr Somanathan said that the Indian Coast Guard is on the path of rapid expansion which requires large number of state of art ships and aircraft to strengthen the maritime security mechanism. Assets requirement are being met by adding new ships and replacement of ageing existing OPV class of ships in phased manner which have been inducted 30-35 years ago. The Chief Guest also acknowledged the timely delivery of OPVs by L&T to ICG.