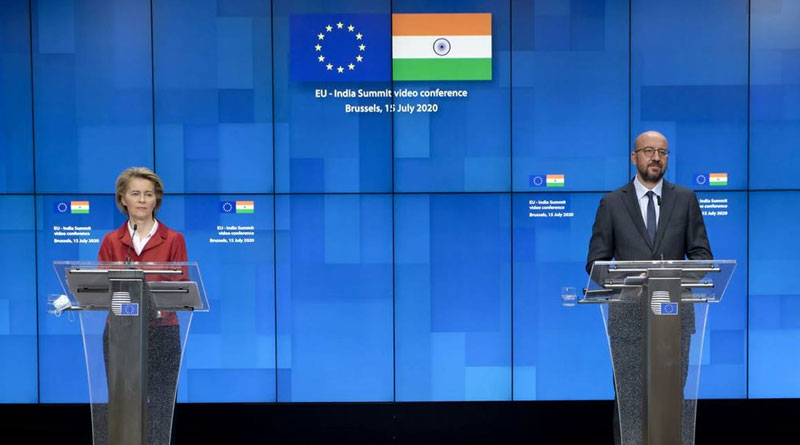 Bolstering its defence and security cooperation, India and the EU will work to reinforce maritime security, especially in the Indian Ocean where 40 “per cent of our trade passes,” President of the European Council Charles Michel remarked after the EU-India summit via video conference.

The leaders agreed to launch a dialogue on maritime security and consultations on security and defence, and to enhance naval cooperation. Additionally, Europol and its Indian counterpart the Central Bureau of Investigation (CBI) will support law enforcement authorities of the member states of the EU and India in preventing and combating organised crime and terrorism. The two sides will also step up cooperation to fight terrorism and cyber threats including its financing and countering radicalization.

“Today’s (15 July 2020) meeting clearly showed that both the EU and India want a stronger strategic relationship for the future. India can count on the European Union. And we count on India to be a key partner,” President of the European Council Charles Michel after the end of the EU-India video conference.

Addressing the summit, the Indian Prime Minister said that he wants the India-EU partnership to strengthen further. “For the same, we must work on a long-term strategic perspective,” he said.

PM informed the leadership about the recent developments with China.


After almost 13 years of negotiations India and the European Union have also sealed a civil nuclear cooperation agreement – the Euratom-India. The deal was inked ahead of the EU-India summit.

During the summit, the leaders adopted the “EU-India Strategic Partnership: A Roadmap to 2025” to guide cooperation between the EU and India over the next five years. They also adopted a Joint Declaration on Resource Efficiency and Circular Economy.

A joint statement, reaffirming their commitment to strengthen the EU-India strategic partnership, was adopted, according to which, the two sides will bolster their cooperation in international fora to reinforce “international security, strengthen preparedness and response for global health emergencies, enhance global economic stability and inclusive growth.” In this context, it is pertinent to mention that India will bag G20 presidency in 2022 and has already won the UN Security Council non-permanent membership for the 2021-2022.

India and the European Union also renewed the agreement on scientific cooperation for the next five years, 2020-2025. With the agreement to renew adopted, both India and the EU agreed to further collaborate in research and innovation based on the principles of mutual benefit and reciprocity, as established in the India-EU Agreement on Science and Technology concluded in 2001, which expired on May 17.

This will allow strengthening the institutional linkages in research, integrated cyber-physical systems, information and communication technologies, nanotechnology, and clean technologies, etc. The two sides will engage on 5G and artificial intelligence as well. Human-centric digitalization was also discussed at the summit between the leaders.

According to ministry of science and technology, the review meeting, which suggested the renewal of the agreement on S&T co-operation between the countries, recalled that in the last 5 years, 73 joint research projects have been implemented, resulting in around 200 joint research publications and filing of few patents.

To foster progress on the trade and development agreements, New Delhi and Brussels also agreed to establish a regular high level dialogue at ministerial level, in addition to keeping the global trading system open with the WTO as the “bedrock for of the rules-based multilateral trading system.” The next edition of 16th India-EU Summit is most likely to take place in 2021.