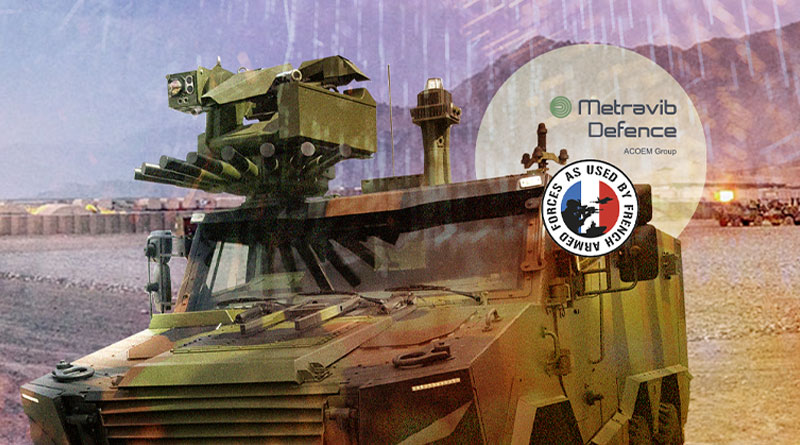 “Present in combat for 25 years, especially in the French army’s VAB TOPs (front-line armored vehicles with remotely operated turrets), METRAVIB DEFENCE’s systems are tried and tested; which has earned them the trust of the French defense procurement agency DGA and  French army technical division STAT,” according to the company statement.

The statement added METRAVIB DEFENCE is more than ever one of the key partners of the French Armed Forces since its PILAR V gunshot detection system became “common equipment” for the new Scorpion vehicles.

The unique skills of METRAVIB DEFENCE were once again recognized due to the UAF label for its PILAR V gunshot detection and tracking system. Acoustic threat detection is an equipment adopted by the armies and it became essential for a better perception of the acoustic atmosphere of the battlefield and therefore for the protection of the fighter.

It is crucial for the deployed troops in the battle to detect the enemy’s position outside the direct field in case of contact. The detection of shots by the acoustics enables to an immediate analysis and a reliable result when comes to decision making. These equipment are essential today, at a time when disruptive technologies are more than ever required to meet the very high demands of modern combat capabilities and particularly while entering the era of collaborative combat.

By capturing the Shock wave and the Muzzle wave of a projectile, the METRAVIB DEFENCE processing software will accurately give the GPS coordinates of one or more shooters with the detail of the azimuth, elevation, distance of the shot, as well as the caliber used and the firing mode (burst, blow-by-blow). These information are essential for better tactical situations and decision-making: limiting the losses by protecting troops and fighting back to neutralize the threat.

“We are not stopping at providing high-performance sensors; we are also developing software that improves operational capabilities on the ground. Our systems are designed with an architecture that is open, to integrate multiple platforms and to interface with a maximum of protection systems, protocols and standard software, and scalable, to integrate machine learning methods and artificial intelligence. With years of experience in the field, we are the ideal industrial partner for data fusion in theatres of operation” , Frédéric Molliex, Director, METRAVIB DEFENCE.

The acoustics allow going much further than the simple location of gunshot. By using all the richness of the sound signals, it is possible to provide very qualitative information on an increasingly broad spectrum of threats: the technology evolves from the detection of fire to a global decryption of the sound environment.

At the time of the combined battle, the METRAVIB DEFENCE systems are a major operational asset that significantly increases the right perception of the battlefield and its dangers.