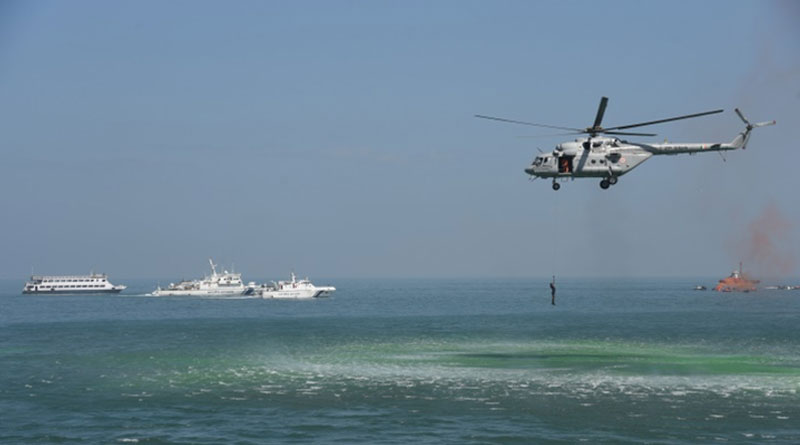 It is for the first time that Aeronautical and Maritime SAR mechanism was harmonised to ensure that lives are saved at the earliest from an aircraft ditched at sea during the biennial National Search and Rescue Exercise (SAREX) which was conducted from 05-06 March 2020 at Goa.

The exercise was conducted as a two-day event with HAMSAR workshop and table top exercise on the first day and sea exercise on the second day. During the sea exercise, a real time scenario of a passenger aircraft ditching in water was exercised to conduct mass rescue operation. The sea exercise witnessed participation of 17 ships/vessels and 06 aircraft of various resource agencies including Indian Coast Guard, Indian Navy, Indian Air Force, Goa Administration, Customs, Marine Police and Goa port.

Rescue of survivors at sea by ships and aircraft and their subsequent transfer ashore for medical management was aptly demonstrated. The Airport Authority of India, Indian Mission Control Centre, Indian Space Research Organization, local State administration and all other stakeholders actively participated in the sea exercise. Designated hospitals and emergency services for disaster management response on a large scale was also institutionalised.


According to the statement issued by the Indian Coast Guard, “The highlight of the exercise was the participation of International observers from 19 countries, the highest so far and maiden participation of commercial airlines and private helicopter operators.”

The exercise provided an opportunity to the aeronautical and maritime community to interact and discuss pertinent issues and gain insight of each other’s perspective to deal with large scale rescue at sea and Mass Response operation, the statement added.

Indian Coast Guard, being responsible for coordinating SAR operations at sea under the aegis of the National Maritime Search and Rescue Board (NMSARB), conducts regular exercises in collaboration with 31 other National resource agencies to respond to any emergency.

The Indian Coast Guard (ICG) is responsible for coordinating Maritime Search and Rescue operations in the Indian Search and Rescue Region (ISRR), which spans over a vast sea area of 4.6 Million Sq Km. Living up to its motto “VayamRakshamah” meaning “We Protect”, Indian Coast Guard has saved 9,706 lives in the past four decades, thereby making our seas safe and secure for the Maritime and Aviation fraternity.

ICG ships and aircraft undertake round-the-clock Maritime surveillance in the maritime zones of India for ensuring safety and security and to respond to any unforeseen eventuality at sea.