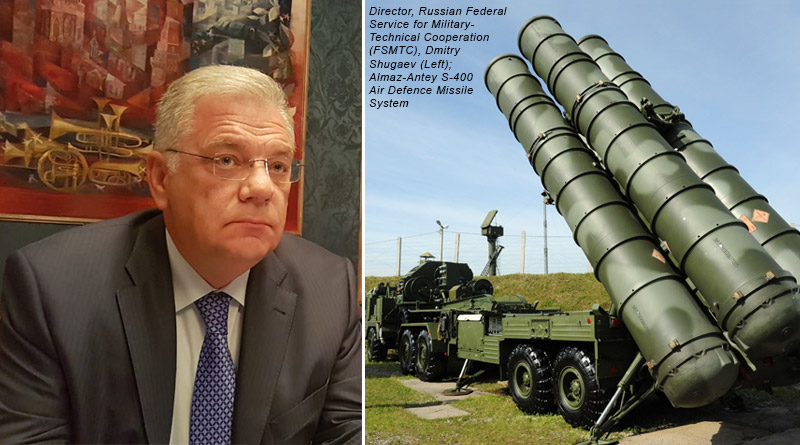 Between words, pauses and meaningful silences

Moscow: Russians officials do not accept that relations between India and Russia have hit a low. But they do concede that ties are lower than what the expected privileged strategic partnership that political leaders of both sides swear by would entail. Their nuanced approach appears compatible with the equally nuanced burden of setbacks that the relationship has undergone. While there are many reasons for the slow downslide, two top concerns are: growing ties between Russia and Pakistan; and India’s seeming gravitation towards the United States’ strategic and regional security orbit, leading to arms sales for interoperability in the Indo-Pacific region across the two Oceans (Indian and the Western Pacific).

Against this backdrop, when asked how military-technical cooperation between Russia and Pakistan would affect the long established similar cooperation between Russia and India, the reply from a top Russian policymaker was unusual, and loaded with unexpressed sentiments. The director of the Russian Federal Service for Military-Technical Cooperation (FSMTC), Dmitry Shugaev told FORCE, “Russia has military technical cooperation with 107 nations across the globe. Russia has strategic and technology cooperation with India and China. It has Intellectual Property sharing with both of them. Still, there is no threat from them to Russia, or challenge to Russia-India relations.”

He further said, “Russia’s military-technical cooperation with Pakistan will not be at the cost of its relations with India since India will get priority”. Then for good effect he added, “We currently have orders worth USD four billion from India, besides commercial projects (through Rosoboronexport – Russian single window for international arms sales) worth more than USD 10 billion in the pipeline waiting for response from the Indian government.” Topping the list is the S-400 Air Defence Missile System (ADMS).

Before putting what Shugaev said into perspective, it would be instructive to understand who he is, since the FSMTC, an organisation unique to Russia, is not well known outside the concerned circles in India. Working directly under the President’s office, Shugaev is responsible for control and supervision of military-technical cooperation with foreign countries. In this position, he understands Kremlin’s geopolitical moorings, and sits above the Russian defence and industrial ministries and the strategic (nuclear) command. He gets direct instructions from Kremlin. Since all military-technical cooperation is a single-window affair in Russia, it is reasonable to assume that Shugaev, who was appointed in 2017, has direct access to the Russian President.

Despite Shugaev’s assertions to the contrary, the truth is that ties between Russia and Pakistan have warmed a lot since the coming of the Modi government in India. The two nations signed defence cooperation agreement in November 2014, and military-technical cooperation agreement in October 2015. This includes arms sales, cooperation in weapons development, repair and upgrade of military products, and strengthening of Pakistan’s counter-terrorism capabilities. Russia assesses Pakistan as a stabilising force in the region straddling South, Central Asia, and the Middle East.

Shugaev was correct in telling FORCE that, “We have signed only Mi-35 helicopters contract (for purported counter-terror operations) with Pakistan.” But, the two sides have been in discussions on a range of military hardware. During the April 2018 visit of Pakistan army chief, General Qamar Bajwa to Moscow, he sought Russian engines for the Chinese made JF-17 aircraft with the Pakistan Air Force. For the last four years, Pakistan has been considering a range of Russian air defence systems from TOR, BUK to Antey-2500; it is keen to buy the T-90 tanks and is seeking information on the Sprut-SDM1 light amphibious and air droppable 125mm gun tank that Russia is offering to India. Moreover, intelligence sharing between Russia and Pakistan has grown gradually since the opening of the Russian consulate in Khyber-Pakhtunkhwa, bordering Afghanistan.

What’s more, from next year, select Pakistani cadets would start training at Russian military academies as part of the increasing defence cooperation. This implies that these cadets would first learn the Russian language. Given that this would be the beginning of the bilateral defence cooperation, over time, a large number of Pakistani military officers across services would become proficient in not only the Russian language, but it military ethos too. One well-known Russian analyst, in an informal conversation with FORCE smirked, “Despite years of so-called strategic partnership, Indian military never sent its officers to the Russian training institutes.” It wouldn’t be surprising if Pakistan also seeks vacancies for its scientists to train in Russian academies, something that has long been on offer to Indian scientists but has been accepted only sporadically.

What is holding Russia back from deeper military-technical cooperation with Pakistan? The fact that the Indian military has nearly 60 per cent of its equipment; it knows that no other country, including the United States, would share as much technology with India; and India remains one of the top five buyers of its arms and equipment.

In this backdrop, the signing of the S-400 contract has emerged as the litmus test for the relationship. Prime Minister Narendra Modi had indicated to President Vladimir Putin during his informal summit in Sochi in May this year that the long-standing contract would be signed by end-2018. Defence minister Nirmala Sitharaman also suggested that S-400 contract would happen, irrespective of the threat of US sanctions.

Shugaev, however, did not sound too confident of the S-400 signing during the coming October visit of Putin for the annual summit to India. He said, “The S-400 is on the agenda. The contract has been finalised and we are almost ready to sign it. If it gets signed during the summit or even by the end of the year, we could integrate it in the company’s (Almaz Antey) production plans for the next year. S-400 ADMS is in huge demand and we will need to adjust our production cycle.”

Unfortunately, two difficulties have cropped up. First, despite India getting exempted from the US’ Countering America’s Adversaries Through Sanctions Act (CAATSA), new US sanctions, especially on Russian banks doing financial transactions for weapon purchases from Russia, have been slapped. According to Shugaev, “We are in the process of solving financial issues, and are open to finding new ways on how to go about doing that. There could be a number of options including some trade in national currencies.”

If this problem was not enough, India has granted Acceptance of Necessity (AoN) to purchase of US’ National Advanced Surface to Air Missile System (NASAMS), ahead of the two-plus-two dialogue between India and the US on September 6 in Delhi. While the AoN does not automatically translate into contract signing, it does indicate (a) the crucial need for the weapon platform through the preferred government-to-government route, and (b) that the purchase is for political rather than for national defence need. This reason would not go down well with Russia, even if the S-400 deal happens, because defence industrial and technical cooperation with Russia is as much transactional as it is non-transactional.

In response to a question on NASAMS, Shugaev said, “We see no need for India to buy the US system since S-400 provides the (air defence) umbrella. The US system has restricted (coverage) area, and since it has no missiles of its own, it has incorporated different versions of existing air to air missiles.” On being asked if Russia would help integrate India’s indigenous Akash surface to air missile into the air defence architecture for the protection of S-400 ADMS, he said, “This is a technical issue on which I don’t have information.” However, he was quick to add that, “S-400 ADMS is a complete system which provides seamless coverage,” thereby suggesting that Akash wouldn’t be necessary.

When FORCE pointed out that it would be foolish to fire a multi-million dollar missile to take out a drone, Shugaev quipped, “Then you buy the Russian Pantsir-S system for the protection of S-400.” Interestingly, while Pantsir-S system has been deployed with S-400 ADMS with the Russian Air Force within the country, in Syria, where the system has been placed in the war zone, Russians are not relying on Pantsir-S alone; TOR Short Range-Surface to Air Missile (SR-SAM) has been deployed alongside for the protection of the ADMS.

While Shugaev may have his own justification for recommending Pantsir-S (made by KBP Tula), TOR-M2KM (built by Almaz-Antey, the producer of S-400) which was one of the contenders for the Indian Army’s SR-SAM programme had been tested in India and was found to be exceptionally accurate. What’s more, it had been tested on the Tata Chassis too. So if at all there is a need for additional Russian systems for protection of S-400, TOR would make better sense, unless of course the indigenous Akash system qualifies, whose desired accuracy is doubtful.

Coming back to the issue of NASAMS and S-400, India proposes to use NASAMS for the protection of major cities including Delhi, while the S-400 regiments (or five units which are to be purchased) would be moved closer to the two borders (Pakistan and China) to intercept and destroy hostile missiles, especially ballistic missiles. The latter, unlike other aerial threats including from cruise missiles, enter space to then re-enter the atmosphere, to finally hit their designated targets. This operational utilisation of the S-400 and NASAMS has the Indian Air Force’s approval. India has been in talks with the US for purchase of NASAMS since the last three years.

However, given India’s limited resources, purchase of NASAMS in addition to S-400 would be unnecessary. Russia uses S-400 to protect its major city including Moscow. For example, S-400 units have been deployed in the forested area outside Domodedovo airport. Since S-400’s longest range missile can hit the target at 400km and can attain the altitude of 60km (space is 100km above the atmosphere), placing S-400 units close to, say Pakistan border, may not accrue the full benefits of the system as given the geography the reaction time would be only a few minutes and trajectory of the hostile missile high. S-400’s missile would not be able to hit its target at 100km altitude and would have to wait for the hostile missile to descend within its range envelop, which would be too risky. Thus, S-400 should be used to protect Delhi and other major cities by providing a missile shield so that it achieves required slant range (of less than 60km altitude) and hits the target during the ascend phase itself.

Moreover, NASAMS, designed by Norway’s Kongsberg Defence & Aerospace and US’ Raytheon is the technology of the Nineties. Given its limited range, it is effective against aerial targets including UAVs, aircraft and cruise missiles, but not ballistic missiles. What use is NASAMS when both Pakistan and China have a plethora of accurate long-range ballistic missiles?

Clearly, the real issue is political. Would India sign on the S-400 contract during the October visit of Putin to India or will it use weapons platforms to balance its relations with Russia and the US?