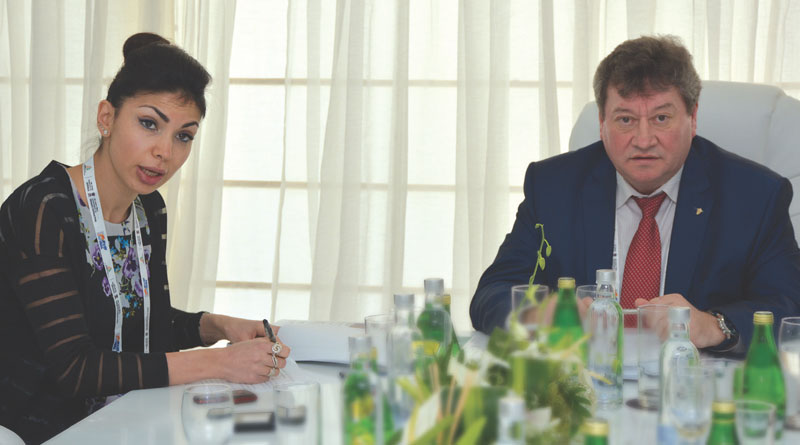 In a rare display of openness, Russian companies go all out to state their case

The large Russian contingent with 39 companies at Aero India is enthusiastic about its special strategic relations with India. The media interaction of deputy director, Federal Services for Military-Technical Cooperation (FSMTC), Anatoly G. Punchuk, which demonstrated the forthrightness not usually associated with Russians was evidence of this. Here are his five responses:

One, “We have offered both Su-35 and MiG-35 to the invitation received by us since the tender (Request for Proposal which would list the technical specifications) has not been opened yet,” he said. Both aircraft while being twin-engine are technically different and thus are meant for different roles. MiG-35 while being “state-of-art fighter is continuation of the MiG family,” while Su-35 is heavier, with long range, more payload carrying capacity and hence more expensive. What both aircraft share is “economics of infrastructure, commonality of weapons and maintenance.” Not willing to take chances, the idea of offering both aircraft is meant to cover the possible technical specifications that would be sought by the Indian Air Force. It is axiomatic that Russia would showcase the growth potential of these fourth-generation plus aircraft after the RFP is out; it would then offer fifth generation sensors, avionics and weapon systems for operationalisation.

Two, Russians are clearly not perturbed by the American sanctions. “We don’t see how S-400 can be impacted by sanctions. We would like to do financial transactions in local currency,” he said, adding that India has a stable currency. Elaborating, he said that, “We have done it quite successfully with India in the past.” In case of S-400 (where transactions would be huge), Punchuk said that while Russia was ready for transactions in local currency, work should start on this as soon as possible. Regarding S-400, while he said that “this (local currency) could be one area (way of doing transaction),” he did not elaborate on other possible modes of transaction. Does that mean that delivery of S-400 could get delayed? Denying this emphatically, he said that contract for five regiments of S-400 was signed in October 2018, and the first regiment would be delivered to India within 24 months of that date. Punchuk clarified that India would get the 380km range 40N6E interceptor as part of the S-400 contract.


Three, on Su-30MKI, which is the backbone of IAF’s combat punch, Punchuk said that till date 187 aircraft (out of total 272) have been made in India. Russia had “received an official request (from India) for 18 more aircraft in January 2019 for which we (Russia) are preparing a commercial offer.” This is not all. There is also the need to modernise and upgrade the existing Su-30MKI fleet. What Punchuk did not say is that once the Russian Zhuk-AME AESA radar becomes operational (according to Jane’s Defence Weekly, this would happen by 2020), Su-30MKI would get more powerful sensors, avionics and engine. The IAF overall requirement could easily jump to a total of affordable 350 numbers of Su-MKI. The Indian media is fond of calling the new-look Su-30MKI as super Sukhoi, a term that Russian officials do not acknowledge.

Four, on the Fifth Generation Fighter Aircraft (FGFA), Punchuk said, “The joint project was suspended by India. We are open to negotiations and ready to come back to the table even when Russia has already made the Su-57 aircraft.” A first of its kind, the Inter Government Agreement for the joint-project from design to research to development and production was signed in 2007. A key reason why the project did not go as expected was reportedly on division on labour. While being an equal partner in funding, India was not given equal work by the Russia side. Whatever the reasons, it is obvious that the FGFA would come back in some form in the future since the IAF has requirement for fifth generation aircraft. Certainly not in an unclear futuristic time-frame that the indigenous Advanced Medium Combat Aircraft seems to be promising.

And five, Russian is gung-ho on winning the Very Short-Range Air Defence System (VSHORAD) competition. The competition was between Russian IGLA-S, MBDA’s Mistral and SAAB’s RBS-70NG. “We won because our system met technical parameters, and was cheaper than the rivals,” Punchuk said. While dismissing media query that the competitors had complaint on the fairness of the result, he said that this competition dispelled the criticism that Russia only got government to government orders. “We won in a multi-stage competition,” he insisted. While Punchuk responded to many more media questions which included Ka-226T, more Mi-17VS and so on, the interesting thing was that not once was he evasive.

This mattered on two counts: his forthright answers exemplified the level of mutual confidence between India and Russia on military-technical matters. And importantly, the usually reticent and invisible FSMTC officials have decided to play on the front foot. To put matters into perspective, created in 2004, the FSMTC reports to the Russian President on all foreign military-technical cooperation. Since the Russian President is single window shop for all defence, military and technology matters, the significance of the office of the FSMTC cannot be overemphasized.