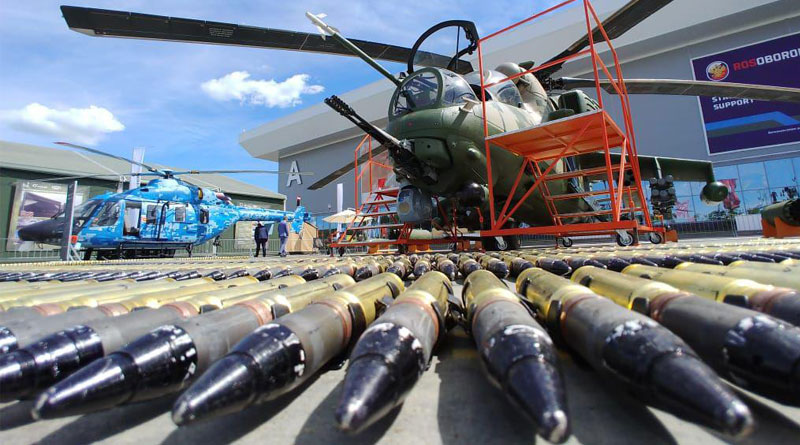 Rostec State Corporation presents over 1000 pieces of weapons, military and special equipment at the ARMY-2019 forum, which has opened in Kubinka, near Moscow. These include tanks, IFVs, helicopters, UAVs, artillery systems and ammunition, advanced firearms, communications equipment, EW systems and many more.

Rostec’s products are presented to the visitors at the pavilions of the Patriot congress and exhibition centre and the open-air exhibition stands. Representatives of the State Corporation and its holding companies will hold negotiations with potential partners and take an active part in the activities of the business program. Signing of contracts for supply of military equipment are planned at the Forum.


“This year we’ve invited delegations from over 100 countries to take part in ARMY-2019, official meetings will be held with 70 of them on the sidelines of the Forum. I would like to point out, that the level of representation of partner countries is quite high this year: over 30 of them are headed by defence ministers, their deputies and chiefs of the general staff. We will present them over 1000 pieces of advanced weapons, armour, helicopter, artillery and other technology. We will also demonstrate modern ammunition, domestic firearms, communication, electronic warfare and intelligence systems. Russia confidently continues to occupy second place in the world by the volume of arms exports. In 2018, Rosoboronexport’s deliveries amounted to USD 13.7 billion and export portfolio exceeded USD 50 billion, which are a new record for us. In many ways, these numbers are achieved via active marketing through such platforms as the Army Forum”, said the CEO of Rostec Sergey Chemezov.

All key holding companies of the corporation, such as High Precision Systems, UralVagonZavod, Tecmash, TsNIITochMash, Russian Helicopters, United Engine Corporation, KRET, Ruselectronics, Shvabe and Avtomatika, are present at the Forum.

The International Military-Technical Forum ARMY-2019 is held on June 25-30 at the Patriot congress and exhibition centre of the Russian armed forces located in Kubinka, near Moscow. This year, around 1500 companies and over 1 million people will participate in the Forum.