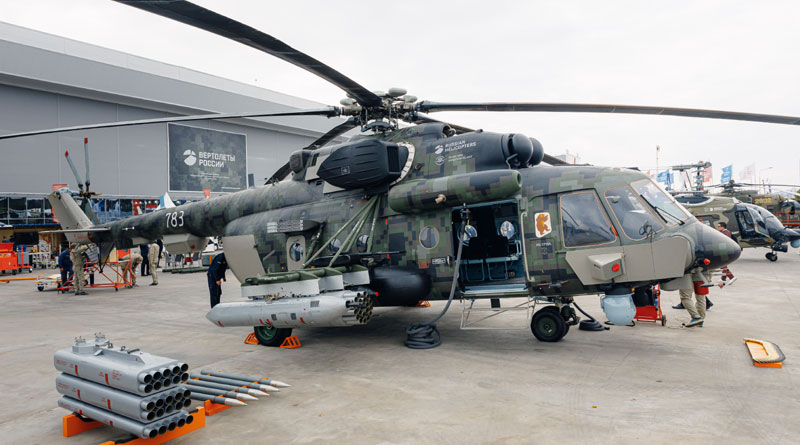 Currently, all Russian helicopters are manufactured at the enterprises of the Russian Helicopters holding, which have extensive production, scientific and technological capacity; the training of foreign specialists is organized both in Russia and abroad.

At the International Helicopter Industry Exhibition HeliRussia-2020, which will be held from September 15 to 17 at Crocus ExpoInternational Exhibition Center in Moscow, JSC Rosoboronexport is presenting the full export lineup of Russian military helicopters.

“The Rosoboronexport delegation will discuss with foreign partners the prospects for cooperation on supplying advanced helicopters of the world famous Mi and Ka brands abroad. Despite the current global difficulties, we assess the rate of contracting and replenishing the order book for Russian rotary-wing aircraft projected for the coming years as good. The world market isn’t saturated yet; quite the opposite, this niche is expanding, mainly due to the versatility of helicopters, which can be used by law enforcement and civil structures everywhere, primarily in emergencies,” said Director General of Rosoboronexport, Alexander Mikheev.

In the helicopter segment, Rosoboronexport’s partners are represented by more than 70 countries in the Middle East, Asia-Pacific region, Latin America, Africa, CIS and Europe, where Russian rotorcraft are in service with army, counter-terrorism and special forces units, law enforcement agencies and emergency services.


A press note by Rosoboronexport stated that, “These reliable and durable machines have been successfully tested in combat and challenging climatic conditions, setting dozens of world records in various categories. They can do anything, from reconnaissance and strike missions, amphibious and rescue operations to the provision of emergency medical care to the population in areas remote from the basing points.”

It further stated that the Mi-8/17 series military transport helicopters, the world market’s bestsellers, have been most in demand and therefore most widespread in the world in their class for many years. Attack helicopters such as the Mi-35 , Ka-52 and Mi-28 , modernized with regard to experience of their actual use in ‘hotbeds’ of the planet, are gradually filling their niche. Foreign partners traditionally show great interest also in the Mi-26T2 heavy-lift helicopter, which is the absolute champion in its class.

Recent cases of Russia’s helicopter export development include- signing of the first export contract for the supply of Mi-38T multi-mission helicopters; establishment of a joint Russian-Indian enterprise to manufacture the Ka-226T helicopters; commissioning of a helicopter flight training center in Venezuela built with the participation of specialists from the two countries.

Mi-171E helicopters  succeeded in a special ‘northern’ version in Argentina, where the Russian machines operate effectively in the harshest Antarctic conditions. This contract ‘turned’ 10 years old in 2020, a kind of anniversary.

“Over 1,000 Russian helicopters of different versions have been delivered abroad under Rosoboronexport contracts for almost 20 years. Rosoboronexport and Russian industrial enterprises are implementing helicopter repair, modernization and after-sales service projects, including on the premises of the established helicopter service centers. Together with Russian Helicopters, we work systematically in the areas of combating counterfeiting and protecting intellectual property rights in the process of military-technical cooperation related to an increasing amount of work within research activities, licensed production, joint ventures establishment and other projects, which involve the transfer of Russian military and dual-use technologies,” said Alexander Mikheev.

For 12 years, HeliRussia-2020 has earned a high status as the landmark event for the global helicopter industry where market professionals exchange experience, discuss current projects and plans for the future, and unveil cutting-edge developments. Leading industry experts from all over the world, interested in the latest products, innovative technologies and other production achievements of the Russian and global helicopter industry, gather here every year. That is why Rosoboronexport’s business program at HeliRussia-2020 includes not only negotiations with partners, but also the participation of its specialists in round tables and conferences, seminars and presentations.