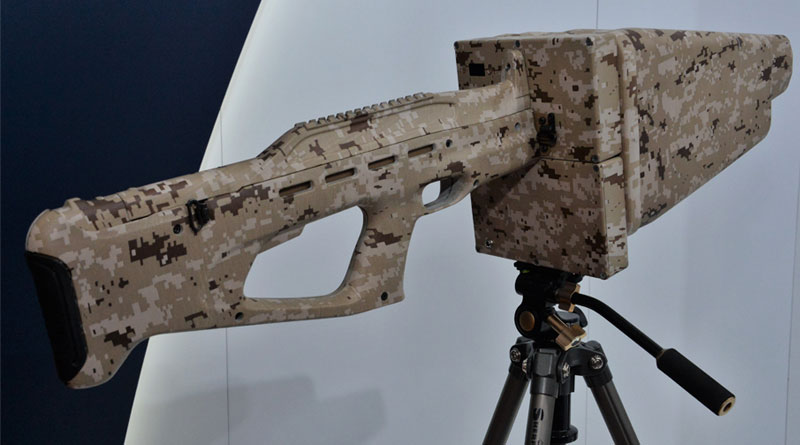 JSC Rosoboronexport (part of the Rostec State Corporation) is demonstrating Russian systems, designed for the counteraction to unmanned aerial vehicles of all types, within the international aviation and space exhibition Dubai Airshow 2019, the Russian defence major said in a statement.

“Today, unmanned aerial vehicles pose threats beyond the military sphere. In our daily life, we see more and more examples when drones are used for illegal purposes, i.e. for espionage, transportation of cargoes and even for terrorist attacks. Taking that into account, industry enterprises, including Rostec, are creating a wide range of assets of electronic countermeasures – on different platforms, in various form-factors, as well as highly mobile systems, which may be quickly deployed on civilian installations and industrial enterprises. Such systems are capable of detecting drones of different sizes, identify them, overtake control and effectively disable drones. The demand for such products in the world is extremely high, and in the next 5 years it is estimated at the level of 2 billion dollars,” said Rostec’s general director Sergey Chemezov.

Practice, including the combat experience of Russian armed forces in Syria, shows that small and miniature UAVs are widely used not only by regular armies, but also by terrorist organisations and criminal groups. Low cost, availability and friendly control interface make drones one of the most effective assets for achieving illegal goals.

“Just recently terrorists in the Middle East showed that disregard of this problem may lead to critical outcomes for strategic industries of a separate state and even influence the world financial market. Classical defensive assets turned out to be helpless against this challenge, which was admitted by their producers. Rosoboronexport reacted to the situation quickly and prepared unique solutions to protect vital installations of transportation, fuel and atomic infrastructure from attacks. We have already sent to our partners in the Middle East, North Africa and other regions our proposals, including services on building a layered point and area system of electronic countermeasures. This system will provide a reliable protection of territories and sites from separate UAVs, as well as from their groups, including swarms of drones,” said Rosoboronexport’s director general Alexander Mikheev.


The layered point and area system of electronic countermeasures against small-sized unmanned aerial vehicles may, at customer’s request, include a number of elements, which differ in their radius of action, mobility and characteristics of covered sites and territories.

Area coverage of territories is provided by the repellent electronic warfare complex, which is developed and produced by JSC Defensive Systems.

The complex detects the UAV itself and the ground control station via their transmitted radio signals, determines UAV type and the direction of its motion, after which it suppresses its data links, depriving it of communication, control and navigation. The distinctive feature of this complex is its ability to jam all UAV’s control circuits.

Repellent is an asset with a big radius of action, i.e. it is capable of detecting and suppressing UAVs at a distance of no less than 30 kilometres. The complex may operate in any season, all climate zones and in the most unfavourable weather conditions, including dust, rain and strong wind.

To cover vital installations, which may be airfields, sites of atomic or energy complex, etc., Rosoboronexport offers a wide spectrum of products of the Avtomatika Concern.

The Sapsan-Bekas mobile multi-purpose complex of countering unmanned aerial vehicles uses both passive and active means of detection. It provides for a guaranteed detection of all types of UAVs, including the ones with a minimized access into radio networks. All the assets of target detection and influence are unified by an automated workstation of control and information display. The complex is capable of carrying all-round observation and scanning an assigned sector.

Sapsan-Bekas may detect UAVs by means of electronic intelligence at a range of no less than 20 kilometres and means of active radio location at a distance of 10 kilometres. The complex also includes systems of optical and electronic recognition of UAVs, i.e. a video camera of a visible spectrum and a cooled thermal scope. The range of drones’ recognition by optical assets is up to 8 kilometres.

The range of jamming of control and navigation circuits depends on the offered configuration and may reach 30 kilometres, varying in line with customers’ requirements. Besides, the complex may act as a target designation asset for other electronic countermeasures and air defence systems.

The Kupol and Rubezh-Avtomatika complexes carry out continuous observation and create an umbrella dome over the installation. This is a barrier, which cannot be overcome, and which is capable of repelling attacks of separate drones and their groups, coming from different directions and heights in a radius of no less than 3 kilometres.

The Luch portable complex may be quickly deployed and used for the protection of various installations. It detects UAVs and creates interferences, which jam control and navigation circuits in an assigned sector at a range of no less than 6 kilometres.

The Pishchal portable complex performs similar missions. Its weight is only 3.5 kilograms, owing to which it is one of the lightest products, offered in the market. This means that Pishchal may be included in individual sets of equipment. The range of jamming of control and navigation circuits of UAVs is 2 kilometres.

A mock-up model of the Pishchal complex is demonstrated on Rosoboronexport’s exhibit, where it will be possible to obtain comprehensive technical information on all the Russian assets to counter unmanned aerial vehicles and discuss options of cooperation.