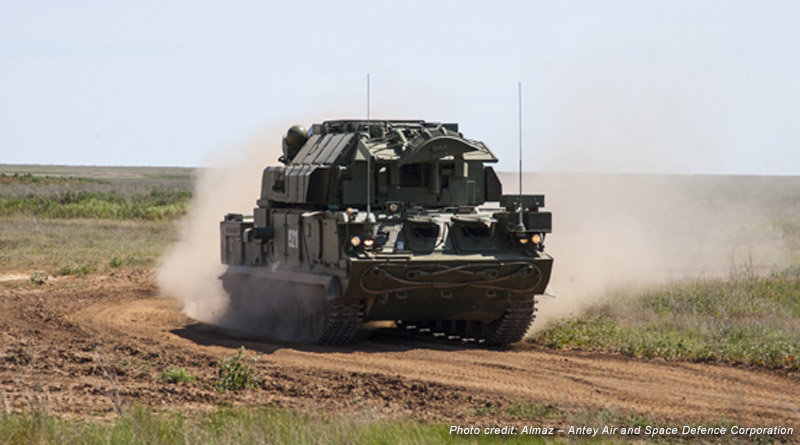 The newest Tor-E2 Surface to Air Missile (SAM) system developed and produced by the Almaz-Antey Air and Space Defense Concern is being promoted by JSC Rosoboronexport, part of the Rostec State Corporation.

A long-awaited novelty in the segment of short-range air defenses, it’s no wonder that many foreign customers from different regions of the world are taking a keen interest in the Tor-E2. The SAM system not only retains the best qualities inherent in the Tor family but also becomes an even more formidable weapon against any current air threats. The system is superior to most of its counterparts in the world market given its unique capabilities and performance. It is second to none in mobility and survivability. Rosoboronexport is prepared to consider applications from its partners for the supply of these systems,” said Director General of Rosoboronexport, Alexander Mikheev.

The system can provide air defense for army units in all types of combat and on the march, as well as to protect military and other critical facilities from attacks by manned and unmanned aerial vehicles.

The Tor-E2 can also target and engage airplanes, helicopters, cruise, anti-radar and other guided missiles. The system is capable of operating in intense jamming and counter-fire environments, in any weather, day or night. In addition, it effectively destroys the attacking precision guided munitions, such as glide and guided air bombs, as well as UAVs within its engagement envelope.

Setting it apart from the competition, the Tor-E2 combat vehicle is an independent, mobile, all-terrain fighting unit that provides detection and identification of air targets on the march and at the halt, target lock-on and engagement at the halt, from a short stop and on the move.

The SAM system includes a high level of automation and unique algorithms which minimises crew involvement in the engagement process.

A battery of the four-channel Tor-E2 SAM systems, consists of four combat vehicles which can simultaneously engage up to 16 targets flying from any direction at a range of at least 15 km and an altitude of up to 12 km. Each vehicle carries 16 missiles, twice as many as the previous iteration of the Tor system.

The Tor-E2 is a unique weapon. One combat vehicle incorporates everything necessary for anti-air warfare, from target detection to destruction. The Tor-E2 system far exceeds its counterparts in combat survivability. To knock out a Tor battery, all of its combat vehicles need to be destroyed. For most of its counterparts, disabling a command post or battery radar would be sufficient to take down a SAM system.

Moreover, two Tor-E2 combat vehicles can operate in the “link” mode. This enables them to exchange information about the air situation at different altitude ranges and coordinate joint engagement operations. In this mode, one of the combat vehicles, acting from an ambush, receives information from the other one and does not reveal itself until the launch of the missile.

The possibility of integrating the Tor-E2 SAM system into any existing air defense system available to the customer, including that compatible with NATO standards, considerably expands its export potential. To this end, a command post can be attached to a battery of four Tor-E2 combat vehicles to control and coordinate the Tor combat vehicles and interact with the customer’s air defense control system.

“Rosoboronexport is ready to provide exhaustive information on the Tor-E2 SAM system at the upcoming Army 2018 International Military Technical Forum. In addition, at this venue, we expect much attention from our foreign guests to other new air defense weapons promoted by the Company – the Viking SAM system and the Gibka-S MANPADS squad combat vehicle,” added Alexander Mikheev.