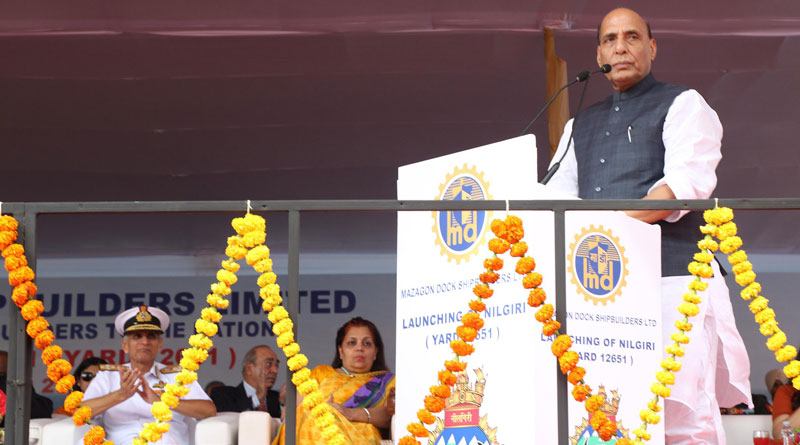 Defence minister Rajnath Singh on September 28 inaugurated the Indian Navy’s first aircraft-carrier dry dock in Mumbai. The Aircraft Carrier Dock (ACD) is the largest dock of the Indian Navy measuring a mammoth 281 m in length, 45 m in breadth and 17 m in depth. This dock can accommodate the pride of the Indian Navy, aircraft carrier INS Vikramaditya.

The ACD is also the first Indian dry dock built into the sea, unlike the conventional docks, which are built on the land, thereby conserving premium land space and providing the Navy with 0.5 km of crucial berthing space.

The Director General of Naval Project (DGNP), Mumbai, had awarded HCC the contract to construct the dry dock and to strengthen the associated North and South wharves on 12 April 2010.

The director & group chief executive officer, Arjun Dhawan, HCC said, “HCC is proud to have partnered with DGNP to create a strategic naval asset. The dry dock is a symbol of national pride, and demonstrates exemplary engineering and project management capability.”


The execution of the mega project is a remarkable feat of civil engineering. 38 caissons were used for construction of both dock walls, also known as Fitting-Out Berths (FOBs). The dock floor, having a thickness of 1.5 m, can safely hold ships of a tonnage up to 90,000 tonnes. Achieving this up to a length of almost 300 m into the sea required the building of an Entrance Coffer Dam, which consisted of 115 steel piles filled with reinforced concrete, weighing over 60 tonnes each, and driven more than 20 m into the sea bed to ensure safety and stability.

As the Dock is built into the sea, there is persistent pressure acting on the dock floor as well as on the dock walls. A complex maze of under-dock floor pipes ensures relief from this pressure and provides safe drainage of water to a sump from where it is returned to the sea.

As a precursor to maintaining water-tight integrity, two floating Caisson Gates, each weighing 2,000 tonnes, were constructed in a process akin to ship-building.

Time is of the essence in any docking activity. The ACD has two Equilibrium Filling Valves, each of which can fill the dock with seawater in 90 minutes.  For removal of water there are eight dewatering pumps; seven pumps in tandem can dewater the dock in 150 minutes. The hauling-in system can pull the ship in or out using minimal human intervention. Four dock-arm machines can be used to reach inaccessible areas of the docked ship with ease. All services for ships and submarines can be controlled / monitored by a Supervisory Control and Data Acquisition system which has brought a new dimension to dry dock facilities hitherto unseen in Indian Navy dry docks.