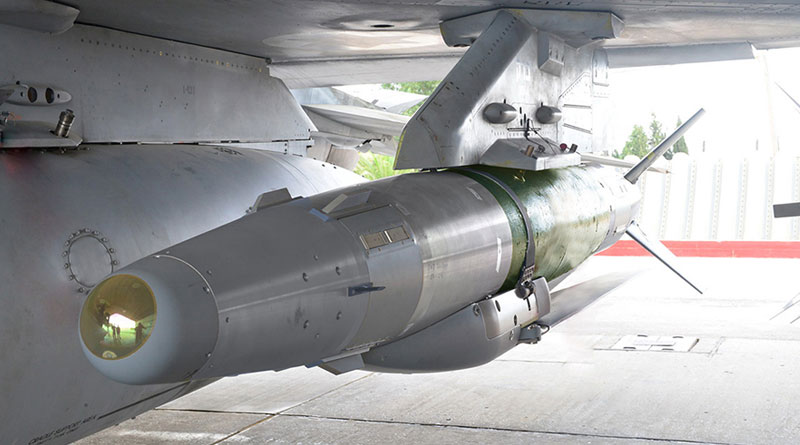 SPICE 1000 attacks targets with pinpoint accuracy and at high attack volumes, without depending on GPS navigation in GPS-denied environments

At a festive ceremony held on 2 July 2019, the president of the State of Israel, Reuven Rivlin, Prime Minister and minister of defence Benjamin Netanyahu, and Chief of Staff Lt Gen. Aviv Kochavi, awarded the Israel Defence Prize to projects and operations that contributed to the security of Israel and to its qualitative military edge and technological superiority.

The Israel Defence Prize for 2019 was awarded to the men and women involved in the following projects: RAFAEL’s SPICE 1000 weapon system, the campaign to expose Hezbollah tunnels in the north, the Mossad operation in an Iranian nuclear archive, and a technological development project of the Israel Security Agency (ISA).

SPICE 1000 is part of RAFAEL’s wider air-to-surface SPICE Family (250, 1000, 2000) of stand-off, autonomous, air-to-ground weapon systems that attack targets with pinpoint accuracy and at high attack volumes, without depending on GPS navigation in GPS-denied environments. SPICE is combat-proven with the Israeli Air Force and is in operational service with a number of international users. To date, RAFAEL has received the prestigious prize 52 times, for breakthroughs such as the IRON DOME, DAVID’s SLING, TROPHY, POPEYE and many more.


The Indian Air Force also last month inked an INR 300 crore deal with Rafael Defence Systems to procure a batch of SPICE 2000 guided bombs. The IAF had used such bombs against the terror camps in Balakot on 26 February 2019.

“The role of the defence establishment and the civilian industries that accompany it is to be the invisible defensive wall that pushes conflict behind enemy lines, and allow us citizens to continue to go about our daily lives. This is the reason we invest so heavily in creative and ground-breaking technological development. I want to thank you and your families for the exhausting and dedicated work, and for the endless effort you have invested and continue to invest,” Reuven Rivlin said.

Israeli Prime Minister Benjamin Netanyahu also commended the prize winners. “We will always defend ourselves. And our true force is in the minds and hearts that are present here. You, the winners of the Israel Defence Prize, have made a fundamental contribution to our defence and deterrence. You have all done an excellent job. Go forth and succeed in ensuring the eternity of our nation,” he said.