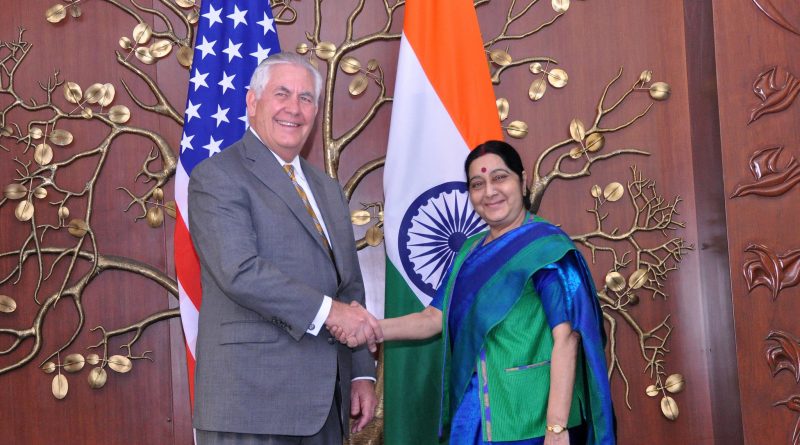 With its elated geopolitical aspirations through the Quad — comprising the US, Japan, India and Australia — collective architecture appearing pre-mature, India would need to reassess its options regarding China especially since the One Belt One Road initiative has been added to the Chinese party constitution.

While the Quad idea is a decade old, two recent incidents had propelled it to centre-stage, making China believe that a containment strategy against it was getting real. The first incidence was regarding Japanese parliamentary elections where Prime Minister Abe Shinzo emerged stronger. It was said that he would push hard both the Quad idea (which he had first proposed in 2006) and seek review of Japan’s Pacifist constitution to cater for the North Korean and Chinese threats. Since Japan has the resources, technology, vibrant defence industry, and now the political will, Tokyo’s proposition appeared credible.

The other incidence was the recent visit of the US secretary of state, Rex Tillerson to India. In an extraordinary proposal, he went steps ahead than any previous US administration in presenting an equal partnership – politically, militarily and economically – to India for ‘a free and open Indo-Pacific region’ against China, who he referred to as the ‘power for disorder and predatory economics’.


Tillerson’s suggestion included an alternative to China’s One Belt One Road, with India as a partner, for road and port connectivity across the Indo-Pacific; joint and combined military exercises between the quadrilateral partners for safety of air space in Indo-Pacific region and sea lanes of communications across two oceans — western Pacific and India Ocean —; and sale of best military technologies to achieve interoperability (ability to fight together) between the Indian military and the US Pacific Command (PACOM), responsible for the region.

In geo-political terms, the US, which had never participated in the ‘balance of power’ system — which involves give and take —, during and after the Cold War, had agreed to do so. It was believed that this was consequent to the US understanding the limits of its power in the South China Sea, where China, despite US’ freedom of navigation patrols from 2015 till date, has built military facilities on disputed and reclaimed islands. This was possible once ASEAN realised that it was not viable to seek prosperity from one power, China, and security from another, the US.

What struck China most about the Tillerson proposition was the re-naming of the Asia-Pacific region as Indo-Pacific, concretising the belief that US had formalised India role across the two oceans. This was assessed by China as a blow to its Maritime Road plan under which it had acquired naval bases in Djibouti and Gwadar with possibilities in Maldives, Bangladesh and Sri Lanka. Instead of China containing India, it appeared to be working in the reverse.

For this reason, before President Trump embarked on his maiden 12-day Asia tour, China’s envoy to the United States, Ambassador Cui Tiankai cautioned that attempt to contain China by sale of US military equipment to India and the formation of the quadrilateral club in the Indo-Pacific region was a mistake.

A series of events, however, exposed the fragility of the Trump administration’s foreign policy, with Tillerson on the verge of losing his job. First, Trump made deep cuts in the US state department allocations indicating he had little time for soft-power and diplomats. When Tillerson allegedly called his President a moron, Trump hit back saying that Tillerson might be replaced. Trump thundered that he alone decided US’ foreign policy.

Since this is true, China and the rest of the world got the unequivocal message at the end Trump’s Japan tour. During the press-conference at the conclusion of his Japan tour, twice Abe attempted to draw Trump out on the Indo-Pacific proposal. Both times, Trump, the astute businessman disregarded it making clear that trade and commerce mattered more to him than strategic manoeuvrings. Taking comfort, Chinese spokeswomen Hua Chunying said that the free and open Indo-Pacific region is ‘gas and speculation.’

Where does this leave India? To begin with, five home-truths should be pondered upon. One, today China is a risen power which cannot be contained. Two, the Quad is a good idea that should be pursued by Indian diplomacy much in the same way as the trilateral India-Russia-China dialogue. Three, India, given its relative national power and status, is not in competition with China; only the US is.

Four, bilateral naval partnership with the US in the Indian Ocean region should be pursued vigorously. In a one-on-one with me in 2013, US PACOM chief, Admiral Harry Harris had said that he saw “India as the pivot in the Indian Ocean” implying that the US would back India as the net security provider in its backyard. Since Trump favours hard-power, the intense partnership between the Indian military and PACOM, without trapping of political epithets, would pass his muster.

And four, India’s disputed border with China is New Delhi’s Achilles Heel; the disparity between the military powers of the two is huge and unbridgeable without outside help. What India needs most is best military technologies to bring respectability to the prevalent imbalance with China in the Himalayas. The US is certainly one important source for this. The problem areas are the US’ fundamental agreements which are coming in the way of India getting best technologies from the US under the 2012 Defence Trade and Technology Initiative.

These fundamental agreements have been caught in heated political and foreign policy debates in India. Critics of these agreements believe that too much closeness with the US will harm India’s interests. Moreover, it has been argued that India would no longer be able to pursue an independent foreign policy, which has been the time-tested principle since Independence.

Then there is the Russian angle to be considered. Russia, it has been said is India’s time-tested friend and the biggest supplier of high-end technologies (its help in India’s nuclear-powered submarine being the prime example). Signing the fundamental agreements would, it is believed make India a de-facto ally of the US with serious implications for its strategic ties with Russia.

While all these and many more such arguments have some merit, India, today is faced with a major foreign policy and security concern: China. Moreover, after the Doklam crisis and the recent 19th Party Congress, China is expected to be more assertive on the disputed border with India. While no nation would fight India’s wars with China or Pakistan, strategic ties with the US could help in two ways. With US’ best technologies, India might be able to build its own military power for deterrence faster. And, China, which desires a peaceful rise, would feel constrained with its border machinations by the strategic partnership between India and the US.