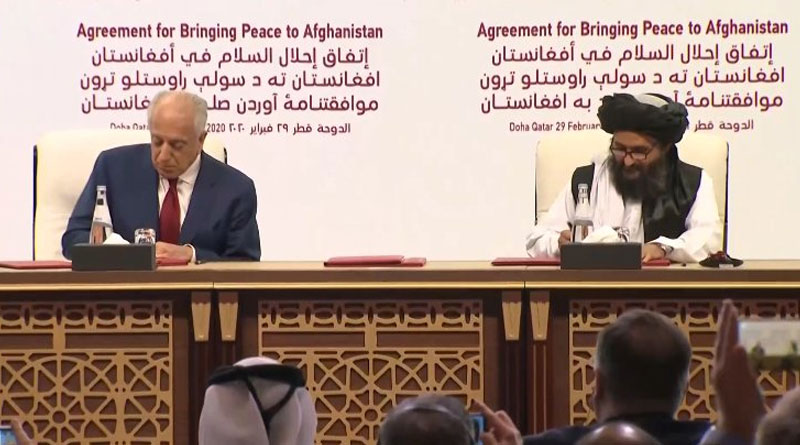 Other parts of this package are a permanent countrywide ceasefire and their connection to the cultivation, trafficking and trade of narcotics

Reluctant to commit to a clause in the recently signed US-Taliban peace agreement that calls for a giant prisoner release, the Afghan National Security Council said that the Afghan Government would want to discuss it in direct negotiations with the Taliban.

“There is no swap of prisoners or any such agreement or promise of it. We would like to discuss the prisoners’ release in direct negotiations with the Taliban but it will be part of the package we want to negotiate,” spokesperson for the Afghan National Security council Javid Faisal told FORCE.

Other parts of this package are Taliban’s relationship with Pakistan, a permanent countrywide ceasefire and their connection to the cultivation, trafficking and trade of narcotics.

Talks between the Afghan government and the Taliban are due to follow. However, the Taliban demand the release of 5,000 prisoners before the intra-dialogue could commence but according to the deal signed by the US and the Taliban, the talks are scheduled for March 10. Throughout the negotiating process, the Taliban had resisted direct talks with the government, terming it an “American puppet.”

An Afghan government team is already in Doha discussing the matter of prisoner exchange with the Taliban according to the sources.


US special envoy Zalmay Khalilzad and Taliban political chief Mullah Abdul Ghani Baradar signed a peace deal on 29 February 2020 in Doha that outlines a 14-month withdrawal timetable for all foreign forces (US and NATO allies) if the hardline Islamist militants uphold the deal. The US troop drawdown which is a phased process will begin with America reducing its troop levels to 8,600 in the first 135 days and pulling its forces from five bases. The rest of its forces, according to the agreement, will leave “within the remaining nine and a half months.”

Trying to see the silver-lining of the US-Taliban deal, Faisal maintains that “What is important for us (Afghanistan Government) is that the deal resulted in direct peace negotiations between the Islamic Republic of Afghanistan and the Taliban. We have our own issues for negotiations and that is a priority for us.”

In a different turn of events, on 2 March 2020 the Taliban told its fighters to resume its operations against Afghan security forces bringing to an end the “reduction in violence” period. In violation of RIV, the militants had launched attacks on ANDSF positions in Ibrahim Khel in Zormat district, Paktia province, Bala Murghab district , Badghis province, Neash in Helmand and Bargi Mataaal district in Nuristan province.

Several reports quoting the Afghan Ministry of Interior said that Taliban carried out 33 attacks in 16 provinces in the past 24 hours, killing 6 civilians and wounding 14. Eight Taliban were also killed and 15 of them detained/wounded in counterattacks.