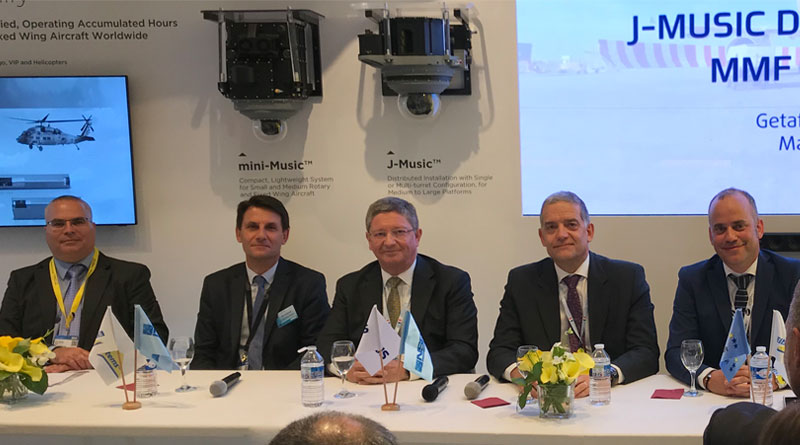 The three-day long integration flight tests performed at the end of May at the Madrid- Getafe airfield were led by Airbus team, supported by Elbit Systems engineers and monitored by representatives of NATO Support and Procurement Agency (NSPA) and the Organisation for Joint Armament Co-operation (OCCAR).

“During these flight tests the J-Music DIRCM system demonstrated flawless functionality and showed the ability to defeat multiple threat types simulated at the A330 MRTT aircraft while conducting a series of flight maneuvers. The integration flight tests also established that the J-Music DIRCM system could handle simultaneous threat scenarios and overcome head-on, tail-on and side-on threats, from several ranges and at different altitudes,” Elbit Systems said in a statement.

The MMF programme is a multinational pooling and sharing initiative in which five nations (Belgium, Germany, Luxembourg, the Netherlands and Norway) are jointly acquiring, managing, operating and supporting a fleet of eight A330 MRTT aircraft from Eindhoven and Cologne. The aircraft, procured by OCCAR from Airbus and outfitted with the Elbit J-Music DIRCM system, are owned by NATO and managed by the NATO Support and Procurement Agency (NSPA).

“The MMF programme is a clear example of nations recognising the need to generate modern defence capabilities in a cooperative, cost-efficient and effective way. The joint work done between NSPA and OCCAR elevates this international defence cooperation even further. Currently with five nations participating in this initiative, the successful integration of the Elbit J-Music self-protection system adds security and operational flexibility to the fleet, making it even more interesting for other nations to join this programme,” general manager, NATO Support and Procurement Agency (NSPA), Peter Dohmen, said.

Director, Organisation for Joint Armament Co-operation (OCCAR), Arturo Alfonso Meiriño, also commented on the development saying, “Managing European armament programmes is at the core of OCCAR, so I am very proud that the Organisation for Joint Armament Cooperation is playing a major role in the MMF programme, contributing to the achievement of another important milestone with the integration of the J-Music DIRCM system in the MMF fleet, achievement reached thanks to the fruitful collaboration of all parties.”

“The completion of this milestone is a significant step that paves the way for the delivery of the first A330 MRTT for the MMF fleet by 2020. It also underlines the excellent work done by the Airbus team together with Elbit and the customers to ensure Europe’s strategic air-to-air refueling capabilities for decades to come,” noted the head of Military Aircraft at Airbus, Alberto Gutiérrez.

General manager of Elbit Systems ISTAR Division, Elad Aharonson, also said, “We are proud to take part in the MMF programme and to deliver the J-Music, a mature DIRCM system, to protect the entire fleet. I believe that the effective cooperation with our partners at NSPA, OCCAR and Airbus on the MMF programme will be a blueprint for additional projects.”