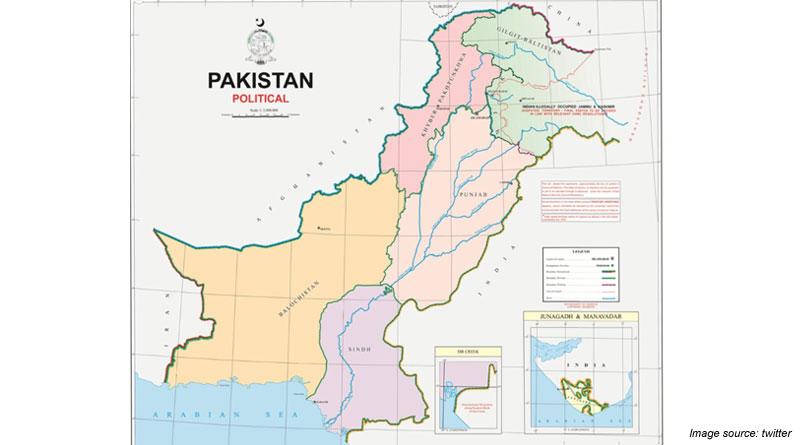 Ahead of the first anniversary of abrogation of Article 370, Pakistan released a political map showing the entire Jammu and Kashmir and parts of Gujarat as its territory. The portion of Kashmir and Ladakh was described as Frontier Undecided.

Notably, the Line of Control, which was mutually agreed upon between India and Pakistan after the 1971 war and ended at map point NJ9842 has been extended unilaterally up till the Karakoram Pass in the new map. With this, Pakistan has laid claim to the entire Siachen glacier.

Dismissing Pakistan’s unilateral cartographic move, India labeled it as ‘an exercise in political absurdity’ with neither legal validity nor international credibility. “We have seen a so-called ‘political map’ of Pakistan that has been released by Prime Minister Imran Khan. This is an exercise in political absurdity, laying untenable claims to territories in the Indian state of Gujarat and our Union Territories of Jammu & Kashmir and of Ladakh,” the ministry of external affairs said in an official press statement.


“These ridiculous assertions have neither legal validity nor international credibility. In fact, this new effort only confirms reality of Pakistan’s obsession with territorial aggrandisement supported by cross-border terrorism,” the statement added.

In a mark of solidarity with Kashmir, Pakistan also renamed its Kashmir highway in Islamabad as Srinagar Highway. Sign boards across the city were updated.

Earlier Nepal also updated its map, showing Kalapani, Lipulekh and Limpiyadhura as its own territories and now is gearing up to send it to the United Nations and Google.