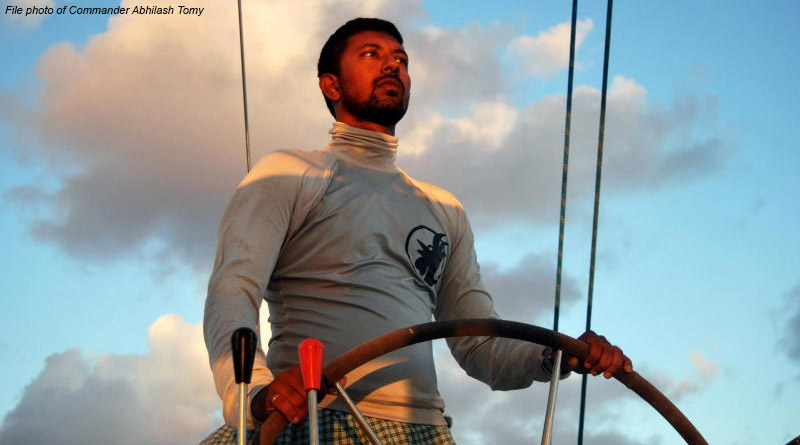 Representing India in the Golden Globe Race 2018(GGR), Commander Abhilash Tomy KC of the Indian Navy, whilst sailing on an indigenously built vessel ‘Thuriya’ suffered a back injury when the vessel was dismasted. He is currently in the south Indian Ocean, approximately 1900 nautical miles from Perth, Australia and 2700 nm (approx 5020 kms on ground) from Cape Comorin (Kanyakumari).

The Australian Rescue Coordination Centre at Canberra coordinated the rescue mission in conjunction with many agencies including the Australian Defence Department and the Indian Navy.


Commander Abhilash Tomy’s boat was dismasted in extremely rough weather and sea condition, with wind speeds of 130 kmph and 10 metre high waves. He was in 3rd position, out of 11 international participants, and had sailed over 10,500 nautical miles in the last 84 days since commencement of the race on 01 July 2018.

The Indian Naval stealth frigate, INS Satpura with a Chetak Helicopter and tanker INS Jyoti mission deployed/operating in the Indian Ocean were dispatched for the rescue mission.

Tomy, in his last message via Sat Phone, has indicated that he is safe on the boat, however, is immobile due to his back injury. On September 25, authorities including Royal Australian Navy along with French Vessel Osiris successfully rescued Commander Abhilash Tomy.