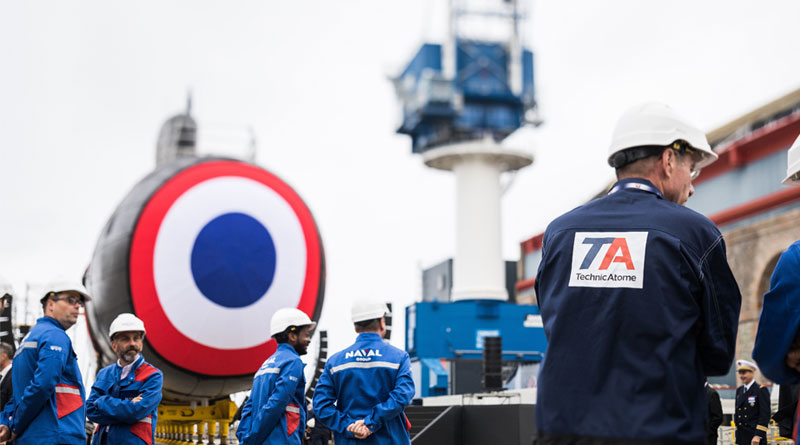 After the launch of the Suffren on 12 July 2019 in the presence of the President of the French Republic, Emmanuel Macron, a new milestone was reached with the divergence of the reactor, a prelude to its first sea acceptance tests prior to its delivery in 2020, TechnicAtome and Naval Group said in a joint statement released on 18 December 2019. The nuclear boiler of the first-of-class nuclear-powered attack submarine (SSN), Suffren, has been fired up for the first time, also called ‘divergence’ of the reactor.

“The divergence of the Suffren’s nuclear reactor has just been performed by the TechnicAtome and Naval Group teams on the Cherbourg site in accordance with the authorisations issued by the French Nuclear Safety Authority (Autorité de Sûreté Nucléaire – ASN) and the French Defence Procurement Agency (DGA).

Designed under the responsibility of the French Atomic Energy and Alternative Energies Agency (CEA), the nuclear reactor was built under the prime contracting of TechnicAtome, reactor designer, Naval Group being responsible for the production of the pressure equipment and the integration of the reactor on-board the Barracuda submarines.


The joint press statement said that one thousand employees from both companies were working full-time in parallel on the six reactors of the Barracuda programme.

Loïc Rocard, chairman and chief executive officer of TechnicAtome, said, “The first divergence of the nuclear reactor is a privileged moment for all those who contributed to make this operational and technological success possible. From the designer to the operator, and including the fitters, testers, welders and so many other trades, this is a rare moment of collective achievement, the symbol of a sector that lives up to its ambitions in the service of the French Navy”.

Chairman and Chief Executive Officer of Naval Group, Hervé Guillou, also commented on the development, saying, “The start-up of the nuclear reactor on-board the Suffren submarine is a new demonstration of the know-how of the French nuclear industrial sector, with TechnicAtome and Naval Group in the forefront. This success gives the country an unequalled defence tool with a high degree of industrial autonomy benefitting the sovereignty of France”.

Divergence is conducted from the Propulsion Control Station (PCS) of the Suffren. The operation consists in triggering a controlled nuclear reaction in the core for the first time. Lasting only a short time, this operation marks the beginning of the constant monitoring of the nuclear reactor by the operating teams. This operation will be continuous until the decommissioning of the submarine, planned for the 2050 decade.