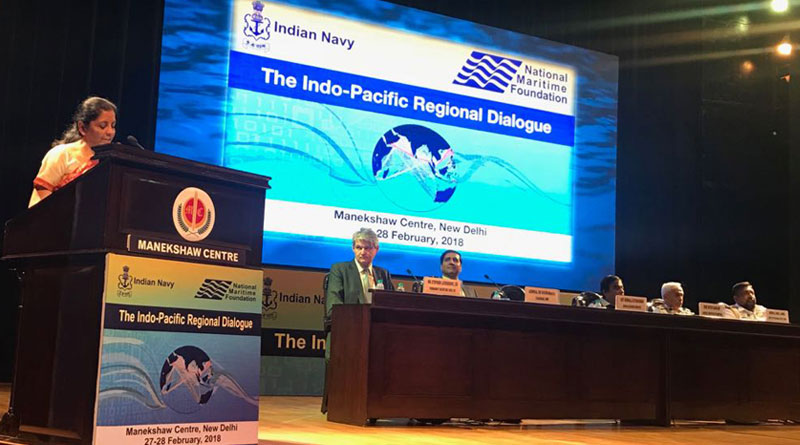 The defence minister’s commemorative address focused on India’s commitment to a rule based multilateral order and Chief of Defence Staff, Sri Lanka, assured India that China’s use of Hambantota port is not military.

Defence minister Nirmala Sitharaman set the tone for the Indo-Pacific Maritime Dialogue by highlighting India’s role in the maritime domain of an increasingly contested world. She stressed that a rule based order is essential underlining Prime Minister Modi’s concept of SAGAR, “Security and Growth for All in the Region”.

The defence minister’s commemorative address at the two-day event organised by the Indian Navy and the National Maritime Foundation focused on India’s commitment to a rule based multilateral order. “We are not an Indian Ocean player alone (sic), we are talking of Indo-Pacific. India has captured its critical position in the global domain,” she said. “Merchandise interest will be safeguarded only when your maritime interests are protected. “The minister pointed out the importance of freedom of navigation and opined that forming alliances can help in rationalizing costs of military preparedness especially in the maritime domain. “Freedom of navigation cannot be unilaterally or arbitrarily questioned by any one country, regional power or group,” referring to the elephant in the room, China, without naming it.

Chief of Defence Staff, Sri Lanka, Admiral Ravindra Wijegunaratne commented, “Our political leadership led by President Sirisena and Prime Minister clearly stated that the government will not enter into military alliance with any country for making our bases available to foreign countries.”  Admiral Wijegunaratne was indicating towards Sri Lanka’s Hambantota port which has been leased to a Chinese firm in lieu of payment of debt. Though the Sri Lankan government has announced that it will be not be used as a Chinese military base and is being operated jointly by companies from both the nations as a civilian port, New Delhi appears to be concerned. “I can assure that no action whatsoever will be taken which will jeopardise India’s security concerns.”

Chief of the Naval Staff of the Indian Navy, Sunil Lanba, underscored the importance of navigational freedom as a precursor to free trade. “80 percent of trade emanating in the Indo-Pacific is extra-regional. Markets are essential for economic development.” He emphasized academic deliberation, “Any policy that comes out of rigorous academic research has better chance of success.”

Admiral Lanba, answering a question from a reporter, informed that Maldives has declined India’s invitation to participate in ‘MILAN 2018’, a multilateral exercise which is being conducted under the command of the Commander-in-Chief, Andaman and Nicobar Command (CINCAN) from March 6 at Port Blair.