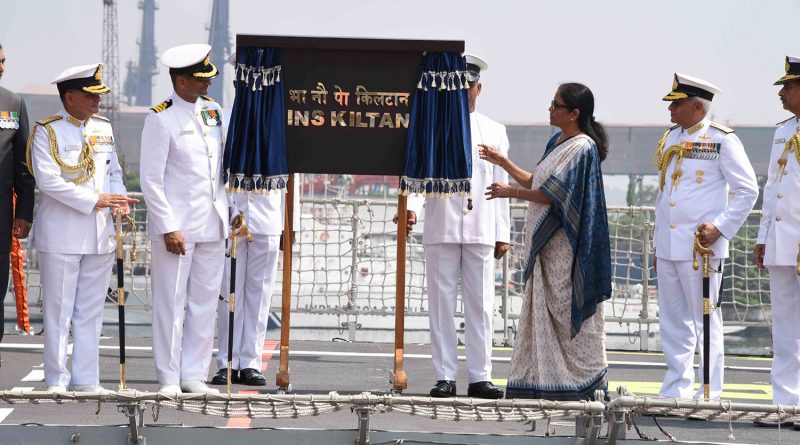 The third of four indigenously built Anti-Submarine Warfare (ASW) stealth corvettes ‘INS Kiltan’ under Project 28 (Kamorta class) is scheduled to be commissioned into the Indian Navy by Raksha Mantri Nirmala Sitharaman at Naval Dockyard, Visakhapatnam on October 16. The commissioning ceremony will be attended by Admiral Sunil Lanba PVSM, AVSM, ADC, Chief of the Naval Staff and host of other dignitaries.


Kiltan is the latest indigenous warship after Shivalik class, Kolkata class and sister ships INS Kamorta and INS Kadmatt to have joined the Indian Navy’s arsenal where in a plethora of weapons and sensors have been integrated to provide a ‘Common Operational Picture (COP)’. It is India’s first major warship to have a superstructure of carbon fibre composite material resulting in improved stealth features, lower top weight and maintenance costs. The ship is also the first major warship to have undertaken sea trials of all major weapons and sensors as a pilot project prior delivery by shipyard to Indian Navy and is ready to be operationally deployed on the day of joining the Indian Navy. The ship’s weapons and sensors suite is predominantly indigenous and showcases the nation’s growing capability in this niche area.

The ship has been constructed using high grade steel (DMR 249A) produced in state-owned Steel Authority of India Limited (SAIL). With a displacement of 3500 tonnes, the sleek and magnificent ship spans 109 meters in length and 14 meters at the beam and is propelled by four diesel engines to achieve speeds in excess of 25 knots with an endurance of 3450 nautical miles. The installed propulsion and auxiliary systems provides very low radiated underwater noise feature, required for anti-submarine warfare. Enhanced stealth features have been achieved by ‘X’ form of Hull, full beam superstructure, inclined ship sides and use of Infra Red Signature Suppression (IRSS) system designed by NSTL for cooling the Engine and Generator exhausts. About 81 percent of the ship is indigenous and it is well equipped to fight in Nuclear, Biological and Chemical (NBC) warfare conditions.