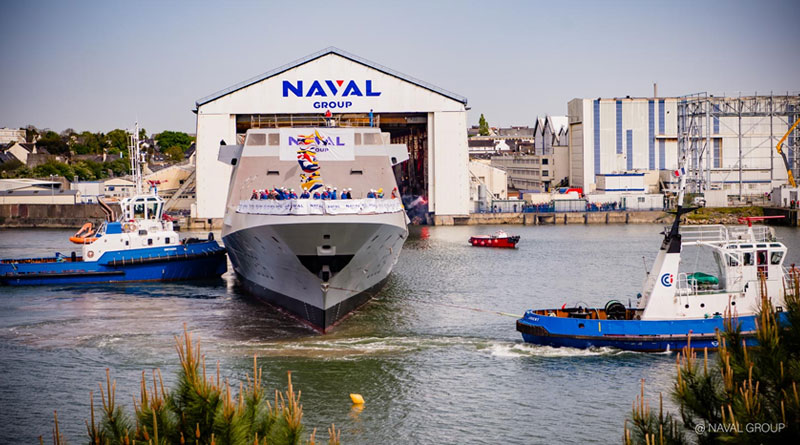 Lorient: First one of two air defence frigates of the FREMM program (FREMM DA), the Alsace is destined for the French Navy. It has the same antisubmarine warfare performances like preceding units. Besides the Alsace has increased capacities in terms of air defence.

Thirteen months after the keel laying of the first block, the FREMM DA Alsace has been released from the construction dock of the Naval Group construction site in Lorient. Ninth in a long line of multi-missions FREMM frigates, it is also the seventh one for the French Navy. It was ordered by the OCCAr on behalf of the DGA.

In order to answer the operational requirements, the Alsace FREMM integrates the last evolutions ordered by the OCCAr. “The essential of the architecture of the first FREMM designed by Naval Group is conserved but its polyvalence will be increased by enhanced capacities in terms of anti-aerial warfare. These modifications particularly concern the combat system.” said Pierre-Jean Cuisinier, director of the FREMM DA program.

The technical adaptations done by Naval Group include the more powerful multifunction radar, reinforced communication tools, three additional consoles for the Combat Management System SETIS in the combat information centre (CIC), with enhanced air defence capacities using the Aster 15 and 30 missiles. In a few days, the FREMM Alsace will also receive its new mast, optimised in order to increase its detection performances.


“This ninth launching is scoring the collaboration between Naval Group, the DGA, the OCCAr and the French Navy in order to produce ships benefitting from the continuous enhancement of the already produced FREMM. Thanks to the good master of the technological risks but also to the determination and the know-how of the group’s teams, it is a new successful challenge.” said Nicolas Gaspard, director of the FREMM programs.

In addition to the ensuring the same anti-submarine warfare missions than the previous FREMM, the FREMM DA Alsace will have the role of ensuring the air defence of major units such as the Charles de Gaulle aircraft-carrier or an amphibious helicopter-carrier based within an aero-naval or amphibious group.

The Naval Group teams and its numerous partners are mobilized in order to deliver the two anti-air defence frigates Alsace and Lorraine, respectively in 2021 and 2022. Seven FREMM have been delivered between 2012 and 2018. The Aquitaine in 2012, the Provence in 2015, the Languedoc in 2016, the Auvergne in April 2017 and the Bretagne in July 2018.

For the international market, the Mohammed VI was conceived and sold to Morocco in 2014 and Egypt bought the Tahya Misr in 2015. The Normandie will be delivered in summer 2019 in conformity with the contractual planning.

Strongly armed, the FREMM DA Alsace use the most potent weapon systems and equipment such as the multifunction Herakles radar, the Aster 15 and 30 and Exocet MM 40 missiles. It can even fire the MU 90 torpedo. The performances of its combat system are reinforced with increased radar and communication capacities, a new radar and electro-optical fire-lead, and a Combat Management System called SETIS which is equipped with specific anti-air defence functions.