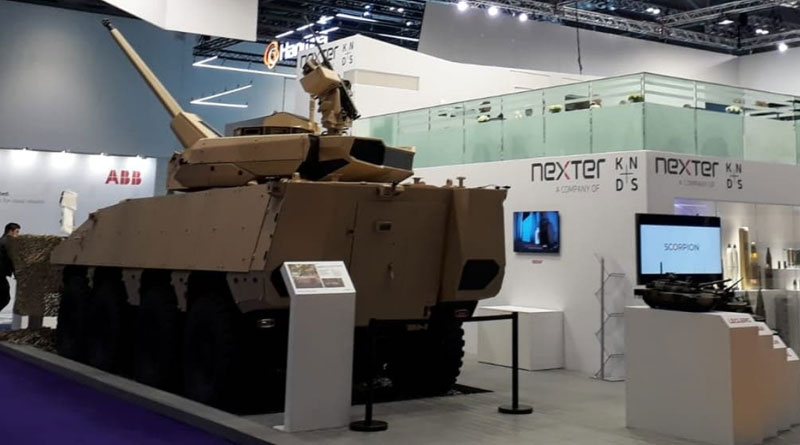 Nexter has a range from armoured vehicles to artillery systems and also masters strategic sub-assemblies, such as weapon systems and ammunition

Nexter, a KNDS company, European leader in land defence, is present at Defence and Security Equipment International (DSEI) from 10 to 13 September 2019 at London Docklands. Architect and system integrator, Nexter is showcasing its know-how on the KNDS stand by proposing solutions, equipment and ammunition that meet the needs of armed and security forces.

Nexter has a range from armoured vehicles to artillery systems and also masters strategic sub-assemblies, such as weapon systems and ammunition or robots and embedded electronic systems.

“Nexter is fully mobilised to meet the challenges of the SCORPION program, through the development of the new VBMR-GRIFFON armoured vehicles (in production), EBRC-JAGUAR, Lightweight VBMR-SERVAL, the renovation of LECLERC MBTs and the future SCORPION increments,” the company said.

Nexter has a global presence, with numerous export successes, such as CAESAR® 8×8 sold to Denmark, the CaMo program with Belgium and the TITUS® armoured vehicle acquired by the Czech Republic. The group continues to develop its commercial presence throughout the world with 52 percent of the order intake in 2018 intended for the export market.

“On the industrial side, the relationship between Nexter and BAE Systems is part of the exceptional dynamic of Franco-British cooperation in the field of defence. The two companies, leaders in their respective countries, are thus celebrating the 26th anniversary of their CTAI joint venture. This collaboration has led to the development and commercial success of the 40CTA gun and 40mm cased telescoped ammunition, a real revolution in this sector,” the company said in a statement.


The company said it will focus on two of its systems for this 2019 edition of DSEI. “First of all, a copy of the 8×8 VBCI armoured vehicle equipped with a 40mm CTA turret. This version of the famous armoured vehicle in service in the French armée de Terre represents the very best in wheeled combat vehicles. It benefits from increased protection, an even more powerful engine, additional carrying capacity and – last but not least – exceptional firepower thanks to the new T40 CTA turret, firing 40mm cased telescoped ammunition. This gun has already won over the French, Belgian (on EBRC-JAGUAR) and British (on Warrior and Ajax) armies,” it said.

Nexter said its CAESAR® 8×8 self-propelled artillery system will also be displayed on the stand in mock-up format. “It is an opportunity for visitors to discover or rediscover a revolutionary system, whose 155mm gun is combat proven in the French armed forces (CAESAR® 6×6). Highly modular, the CAESAR® 8×8 can carry a wide range of equipment according to operational needs (secondary weapons, electronic countermeasures, smoke, fuel reserves, etc.). It can also carry up to 36 complete ammunition and offers a high level of ballistic protection (up to level 3), mine action (level 2A and 2B) and anti-IED. Finally, it has an automatic shell reloading system, whose speed can be configured (semi-automatic to automatic). This advanced artillery system won over the Danish ground forces, who ordered 19 CAESAR® 8×8 (15 to be delivered in early 2020, 4 more in 2023),” adds the statement.

The company said it will display the SCORPION programme vehicles – VBMR-GRIFFON, EBRC-JAGUAR, Lightweight VBMR-SERVAL and LECLERC XLR – whose models will be displayed on the KNDS stand. Nexter will also present some of the group’s innovative solutions such as the FINDMP® touch table, the FINDART® fire support system, the NERVA® robots with their payloads and various equipment: the Episcope on many armoured vehicles and the BATCAM® high-resolution day/night camera.