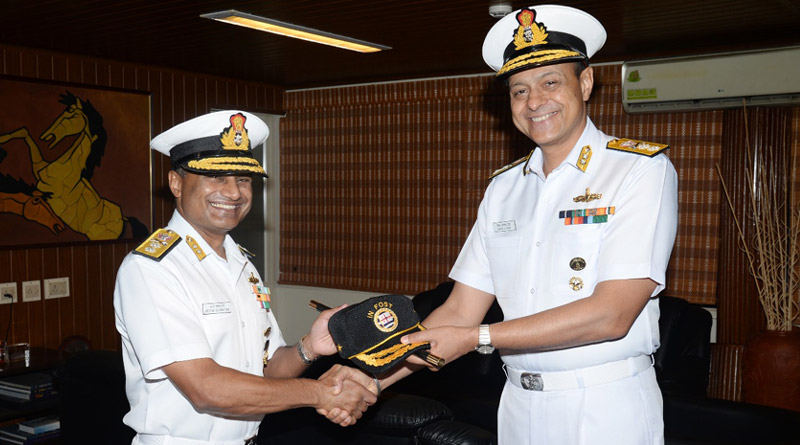 Rear Admiral Krishna Swaminathan, VSM, has assumed charge as Flag Officer Sea Training (FOST) at Kochi on 18 March 2019. A specialist in communication and electronic warfare, Rear Admiral Krishna was commissioned into the Indian Navy on 1 July 1987, and is an alumnus of the National Defence Academy, Khadakwasla, Pune.

He also has the distinction of being the alumnus of the Joint Services Command and Staff College, Shrivenham in the United Kingdom; the College of Naval Warfare, Karanja at Mumbai, and the United States Naval War College, Newport, Rhode Island, USA.


Prior to assuming charge as FOST, the Admiral was the chief staff officer (Training) at headquarters Southern Naval Command and played a key role in the conduct of all training in the Indian Navy. He was also instrumental in raising the indian naval safety team that oversees operational safety across all domains of the Navy.

FOST functions under the operational and administrative jurisdiction of Flag Officer Commanding-in–Chief, Southern Naval Command. His charter includes conduct of operational sea training for ships of the Indian Navy and Coast Guard by enhancing crew proficiency in all aspects, including safe navigation practices, damage control and firefighting drills, weapon firings as well as seamanship training.

The officer has taken over the appointment from Rear Admiral Sanjay J Singh, NM, who has proceeded to Mumbai to assume his next appointment as Flag Officer Commanding Western Fleet (FOCWF).

2 thoughts on “Navy Gets a New Flag Officer Sea Training”