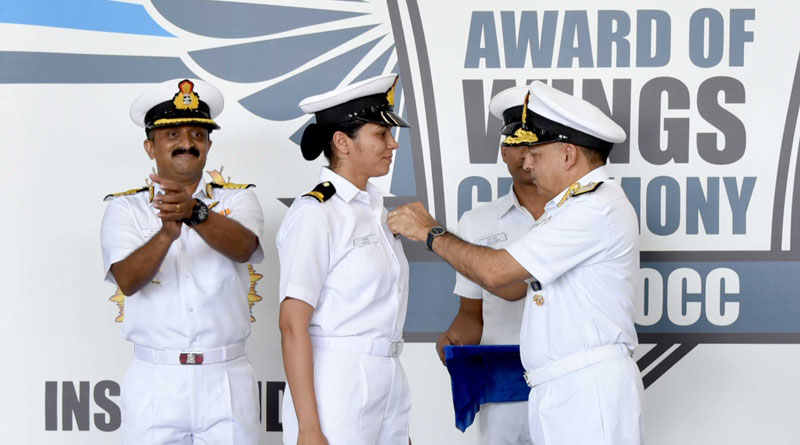 As part of her training, Shivangi has flown Pilatus PC 7 Mk II, Basic Trainer at AFA and completed Dornier Conversion with the Indian Navy at Kochi

Sub Lieutenant (SLt) Shivangi has created history as the first woman pilot of the Indian Navy, on successful graduation from the course. She joined the Indian Navy after completing her operational training, a Navy press release said.

“A batch of three trainee officers of the 7th Dornier Conversion Course (DOCC) including a lady officer qualified as Dornier pilots and were awarded the coveted golden “Wings” at a simple and solemn ceremony held at INS Garuda on 2 December 2019. Vice Admiral AK Chawla, the Flag Officer Commanding-in-Chief (FOC-in-C), Southern Naval Command was the chief guest for the ceremony who presented the “Wings” to the passing out officers, signifying their qualification as naval aviators,” the Indian Navy statement said.


The FOC-in-C South Rolling Trophy for standing first in overall order of merit was awarded to Lieutenant Shivam Pandey.

The award of the ‘Wings’ marks the culmination of one year of flying training at the Air Force Academy (AFA), Dundigal and Indian Naval Air Squadron (INAS) 550, INS Garuda in Kochi. From here on, these pilots will join the ‘Dornier Operational Flying Training’ course at INAS 550 from mid-January 2020, prior to joining an operational Maritime Reconnaissance squadron, the statement from the Navy said.

SLt Shivangi, a native of Muzaffarpur, Bihar was inducted into the Indian Navy under the Short Service Commission (SSC)-Pilot entry scheme, and was part of the 27th Naval orientation course (NOC) Course at the Indian Naval Academy, Ezhimala, a statement from the Indian Navy said. She was commissioned into the Navy in June last year. As part of her training, SLt Shivangi has flown Pilatus PC 7 Mk II, Basic Trainer at AFA and completed Dornier Conversion with the Indian Navy at Kochi. She will continue her training at INAS 550, the Dornier squadron at INS Garuda, to become a fully operational pilot on Maritime Reconnaissance (MR) aircraft.