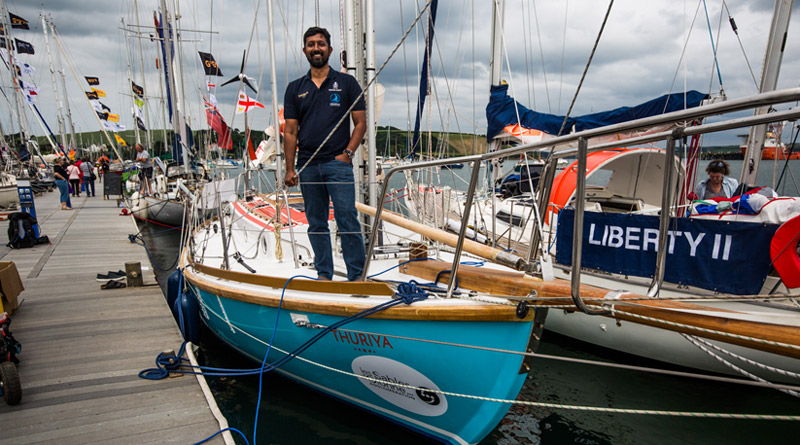 Ready for a second solo circumnavigation of the globe in a non-motorised sailboat, Cdr Abhilash Tomy reached Les Sables d’Olonne in France for the July 1 flag-off of the 30,000-mile Golden Globe Race. While there are going to be 18 skippers at the start line, Cdr Tomy of the Indian Navy has been invited as a special guest at the race.

The race this year will commemorate 50 years since its inception, which saw Sir Robin Knox-Johnston’s successfully completing the voyage in 312 days, becoming the first human to finish solo, unassisted and nonstop circumnavigation of the world.

GGR’s biggest challenge is to have equipment, tools and boat which resembles the one used by Sir Johntson, despite the change in technology. Adding to the challenge, navigation will have to be done looking at celestial objects using physical maps. Communication with the outside world will also be limited as the lone satellite phone is for use in medical emergency alone. First circumnavigating the globe in 2012-13, Cdr Tomy became the first Indian to achieve the feat by sailing for 151 days in INS Mhadei.

Skippers will go south till Cape of Good Hope after beginning at Les Sables d’Olonne. They will continue sailing eastward in the southern hemisphere to pass the international dateline, and pass Cape of Horn to start sailing north in the Atlantic Ocean for the final leg. Cdr Tomy is now aiming to complete the race in 311 days, one day less than Sir Johntson’s timing.

Sailing in the 10-metre ‘Thuriya’, Cdr Tomy will be using a boat whose design is similar to Sir Johntson’s boat ‘Suhaili’, which was incidentally manufactured in Colaba, Mumbai. “Thuriya” has been built at Goa at Ratnakar Dandekar’s Aquarius Shipyard. Cdr Tomy has supplies consisting of specially-prepared food items, and fresh water in the limited space on board.

There were a series of events held in UK’s Flymouth before participants sailed out for Les Sables d’Olonne, from where the first race was flagged, where Sir Johntson was also present. In the two weeks to July 1, mandatory checks, including ones on safety, are being carried out and the sailors are getting the boat ready for the long-haul voyage.

Supported by the Indian Navy and Aquaris Shipyard for the race, Cdr Tomy will have Cdr Dilip Donde (Retd) overseeing as the base manager.

Explaining the journey that awaits him, Cdr Abhilash said, “At the Sagarparikrama (the first circumnavigation), I had used GPS-based maps and other satellite-based technologies. But at GGR, I have to make do with a compass, printed maps, and star and planetary movements. There is a solitary HF radio set for contact. The size of the boat limits the possibility to carry water. Sir Robin had used rain water and used it, I will have to do the same. There is no help from the outside world throughout the race.”