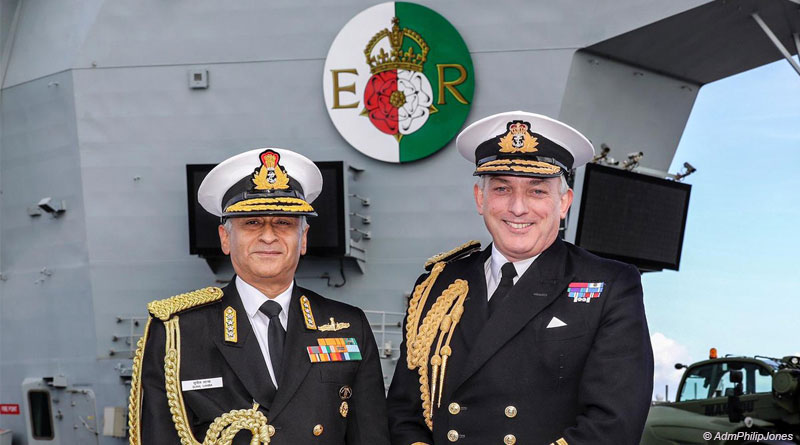 Admiral Lanba, who is on a four-day visit to UK, said the multi-faceted bilateral relations of India and UK have grown from strength to strength to a sustained and mutually beneficial friendship

Chief of Naval Staff Admiral Sunil Lanba, who is on a 4-day trip to UK has said the Chinese presence in northern part of Indian Ocean is becoming a challenge for India, adding that the country was keeping a close eye on Chinese ship and submarine deployment in the region.

During an interaction at the Institute of Strategic Studies in London, Lanba said, “No nation has invested as much as China in shipbuilding. It is a challenge; we keep a close eye on their presence and deployments. It is here to stay.”

China has increasingly been deploying its sea-based assets in the Indian Ocean Region, with the most significant being the acquisition of the Hambantota port in Sri Lanka on a 99-year lease.

Admiral Sunil Lanba is on an official tour to the UK from 12 to 15 March 2019. His UK tour aims to consolidate existing maritime cooperation initiatives with the Royal Navy (RN) as well as to explore new avenues.

Lanba said that over the years, the multi-faceted bilateral relations between the two countries have grown from strength to strength to a sustained and mutually beneficial friendship. Both the countries have a common perspective on maritime challenges and agree to developing a cooperative framework to face them, he said during a discussion on ‘Maritime strategy and its contribution to the Indo-Pacific and global commons.’


He said the bilateral naval exercise Konkan is the cornerstone of India-UK maritime cooperation and the UK has been a preferred port of call whenever India has operated in the northern Atlantic. Lanba said an Indian ship will head to the UK later this year to participate in the Konkan-19 exercise.

Chief of Naval Staff, Royal Navy, Admiral Sir Philip Jones tweeted, “A key component of the relationship between the Indian Navy and the Royal Navy is our carrier capability partnership. Today, it was a pleasure to host Adm. Lanba on board HMS Queen Elizabeth as we discussed areas of mutual interest in the development of our carrier strike capabilities.”

First Sea Lord and Chief of Naval Staff Admiral Sir Philip Jones also said the navies of both countries played a leadership role and which was extraordinary in many ways. “There are obvious similarities between our two navies – a shared outlook, common goals, very clear intentions for the future, reflected in ambitious shipbuilding programmes and maritime innovation programmes,” he added.

Indian Navy and Royal Navy are partners in the Indian Ocean Naval Symposium (IONS), a Maritime Cooperation construct conceptualised and pioneered by Indian Navy in 2008. The Royal Navy participated in the 10th anniversary celebrations of IONS at Kochi in November 2018. The bilateral naval exercise KONKAN is a significant operational link between the two navies and is held every year, alternately off the coast of India and UK. The two navies also interact on a host of issues like training, doctrinal concepts and Maritime Domain Awareness.