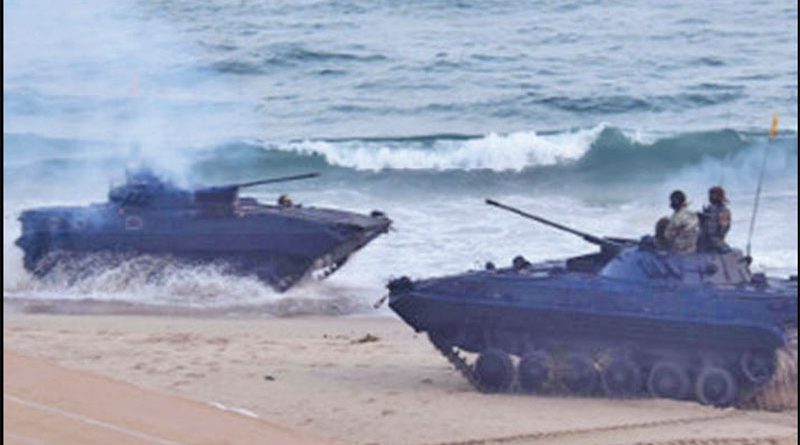 On the occasion of the Navy Day, the Eastern Naval Command (ENC) conducted a Naval Operational Display at the RK Beach on 4 December 2017. The display highlighted the multi-dimensional warfare capability of the Indian Navy in protecting the vast maritime borders and offshore assets of our country.

Minister for HRD, Andhra Pradesh Ganta Srinivas Rao, was the chief guest at the display. The event enthralled thousands of citizens of Visakhapatnam. All Flag Officers of the Command and a large number of officers, sailors and defence civilian employees of the navy were present on the occasion.


On arrival, Rao was greeted by a burst of 84 mm Rocket and Water Plume Charges by Marine Commandos. This was followed by sky divers of the navy descending with the National Flag and the Indian Naval Ensign. The display of naval power continued with the demonstration of helicopters landing and taking off from a moving column of Indian Navy ships Ranvir, Sahyadri, Khanjar and Kamorta in close formation. The navy’s Search and Rescue capabilities were also displayed which have been vital in humanitarian assistance operations within the nation and in neighbouring countries. After the demonstration of its capabilities at sea, the ability of the navy to conduct operation on land was also showcased, wherein Marine Commandos were inducted by slithering operation. This was closely followed by beach assault and amphibious landing on shore by naval vessels using Landing Crafts – Mechanised (LCM). The Marine Commandos then displayed a wide range of combat capabilities, including short–time extraction by a Seaking helicopter. The MARCOs showcased a clandestine sabotage operation by detonating explosive charges on a simulated oil rig.

Fourteen aircraft of seven different types from the ENC, including the Hawk Advanced Jet Trainer, took to the skies in a thrilling Flypast. Subsequently, the ships anchored in formation, and it was followed by ‘Beating Retreat’ Ceremony by the Naval Band. The programme concluded with a display of fireworks and illumination by the ships.