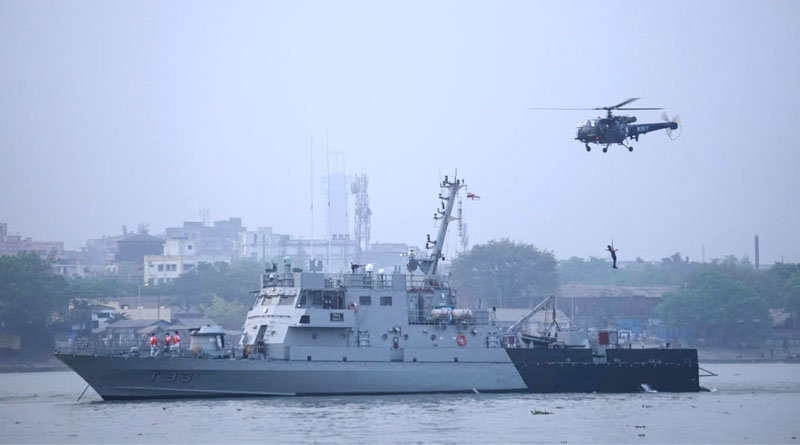 The Indian Navy conducted a maiden Operational Demonstration on the Hooghly River on 20 March as part of the Swarnim Vijay Varsh 2021 Celebrations in Kolkata.

This unique event displayed the maritime prowess of assets and personnel who sail the high seas as well as operate along the coast. Two Waterjet Fast Attack Craft (WJFAC), four Navy Patrol Boats, one each Sea King and Chetak  helicopter, a Marine Commando (MARCOS) team and a Coast Guard Air Cushion Vessel (CG ACV) demonstrated in the ‘Op Demo’. The Governor of West Bengal Jagdeep Dhankar graced the occasion as the Chief Guest.

A High speed ‘Steampast’ by four armed Navy Patrol Boats opened the Op Demo on the Hooghly, followed by the CG ACV, which operating from Haldia, glided over the surface of the Hooghly river displaying its unique manoeuvres. It was followed by WJFACs sailing down the river, executing precise navigational manoeuvers and anchoring mid-river. Formation flying by a Sea King and Chetak helicopter took the demo to the Skies, after which the Chetak demonstrated ‘Search and Rescue’ of a simulated rescue of a drowning person from the river.

Both helicopters thereafter displayed their aerial prowess by performing ‘helibatics’ for the audience. The MARCOS displayed their skill in undertaking fast airborne insertion into occupied territory by slithering down from a Sea King onto a Gemini Assault Watercraft followed by a simulated clandestine beach assault. This was followed by a swift ‘extraction’ by the Sea King utilising a method known as STIE (Small Team Insertion and Extraction), wherein the Commandos latched onto a special rope underslung from the helicopter and were flown out hanging onto it.

The final aerial act witnessed the Chetak displaying vertical replenishment and transferring a Memento from the river to the seating area which was presented by Flag officer Commanding-in-Chief Eastern Naval Command, Vice Admiral AB Singh to the Chief Guest. After a final high-speed salute by the Naval Patrol Boats, the gathering was treated to some patriotic fervour by the Navy Band.

The Op Demo concluded with the ‘Sunset Ceremony’ wherein the Naval Ensigns at Babu Ghat and on the naval ships anchored mid-river, were lowered along with the firing of flares by the ships into the sky illuminating their silhouettes. A stellar fireworks display over the Hooghly brought the curtain down on the ‘Samudri Virasat Pradarshan’.

This was the first time that such an event, involving Naval ships, patrol boats, aircraft and a CG hovercraft, was conducted on the Hooghly at Kolkata. The historic first event enthralled an audience that included armed forces personnel from all three Services, Veterans and general public including children and NCC cadets who thronged the riverbanks of the Hooghly to watch this unique spectacle in Kolkata.