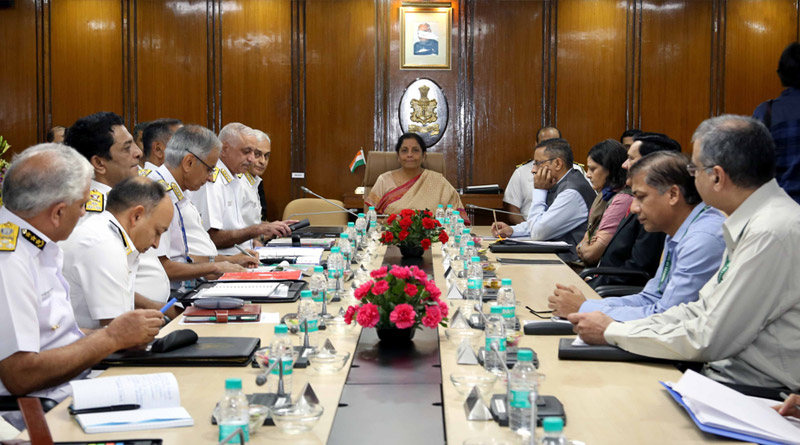 Following three days of effective deliberations, the second edition of the 2018 bi-annual Naval Commanders’ Conference concluded on November 2. Addressing the Naval Commanders present, defence minister Nirmala Sitharaman reiterated the need for the nation to be strong at sea and the Navy to be ready and vigilant to counter any challenge in the maritime domain. During the conference, the defence minister reviewed the combat readiness of the Navy including its pace of modernisation and the progress of various acquisition and infrastructure related cases. Sitharaman extolled the Indian Navy’s diplomatic efforts to support the regional Navies that are in consonance with the Prime Minister’s vision of SAGAR – Security and Growth for all in the Indian Ocean Region (IOR).

Chairing the conference, Chief of the Naval Staff, Admiral Sunil Lanba, addressed the attendees on a plethora of important issues pertaining to operational readiness, capability enhancement, maintenance, op logistics, infrastructure development, and human resource management. The conference witnessed extensive discussions on the functional re-organisation of the Indian Navy towards improving operational efficiency and the CNS encouraged the Commanders to implement innovative and modern ideas towards achieving the same.


The conference reviewed the Navy’s modernisation plans including induction of an aircraft carrier, ships, nuclear-powered submarines, conventional submarines, re-vitalisation of the aviation and sub-surface assets and induction of crucial state-of-the-art weapons, sensors and equipment. Further, development of technical and support infrastructure for maintenance of these assets was also discussed in consonance with the ‘Indian Naval Indigenisation Plan 2015-30’, which has formulated the requirements of the Indian Navy towards the indigenous development of equipment and systems over the next 15 years.

In her opening address, defence minister Nirmala Sitharaman lauded the Navy for the outstanding and efficient HADR operations undertaken in the wake of the recent calamitous floods in Kerala wherein close to 17,000 citizens were rescued. She expressed her satisfaction with which both the Navy and the Ministry of Defence were performing their tasks in a constructive and a cohesive manner to ensure that the capability shortfalls are mitigated and addressed in the shortest possible time. She also appreciated the Indian Navy’s efforts in the areas of indigenisation, self-reliance, and support towards the ‘Make in India’ and ‘Digital Navy’ vision of the ‘Digital India’ initiative.