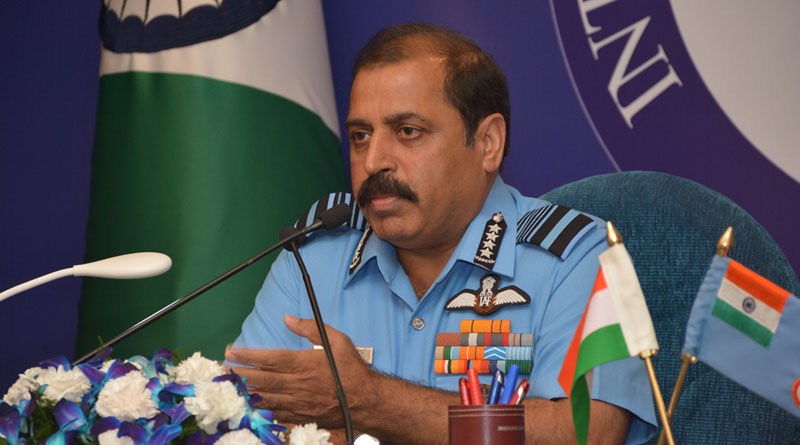 New Delhi: In his first press conference after taking over as the chief of air staff barely four days ago, Air Chief Marshal RKS Bhadauria was both candid and cautious.

Admitting that lack of operational data-link (ODL) was one of the weaknesses which hampered Indian Air Force’s response after Pakistan Air Force’s retaliation on 27 February 2019 to the Balakot air strike of the previous day, ACM Bhadauria said that the IAF has already started work on ODLs.

In an informal conversation on the lawns of IAF’s Akash Mess after the formal press conference, ACM Bhadauria said that IAF intends to data link all its airborne platforms, including the fighters, helicopters, command and control aircraft as well as the transporters. With Integrated Air Command and Control System (IACCS) forming the backbone, over time IAF hopes to have the full range of secure horizontal and vertical networks connecting not only the ground stations with airborne platforms, but also all airborne platforms with one another. This would enable both better situational awareness as well as faster decision-making.

And clearly it would also prevent occurrence of incidents of friendly fire which downed the Mi-17 helicopter in Budgam on the outskirts of Srinagar. The crash had killed six IAF personnel and one person on the ground. Calling it a big mistake, ACM Bhadauria said that those who died in the crash will be “treated as battle casualty.” By saying this he set to rest the speculation as well as wilful canards spread by certain retired officers, especially from the army, that the crash was a result of a technical or pilot error.


Earlier during the formal press conference, the air chief was upfront enough to say that given the available funds, it would not be possible for it to pursue both indigenisation and state-of-the-art technologies at the same time. Hence, the IAF has decided to support the growth of indigenous industry as far as possible even if it means “lack of a little edge,” he said. “In some cases, where we need it, we will do the needful.”

He argued that, “Otherwise we will never be able to indigenise. We will have to go through this 10- to 20-year period, and finally we will be there. In the larger sense, at least in 90 per cent of cases, I think we will be able to manage with indigenous technologies.”

Hence, in pursuance of this path, the IAF has thrown its weight behind both the Light Combat Aircraft MkII and the next-Gen Advanced Medium Combat Aircraft (AMCA) which after being on the drawing board for several years (its model was first displayed at Aero India 2015) has now apparently taken off.

“We have no plans to import any Fifth Generation Fighter Aircraft (FGFA), nor will we enter into any joint development of the FGFA with a foreign country,” said ACM Bhadauria, insisting that the IAF has decided to put all its energy into this ‘make in India’ programme. Incidentally, till about two months ago, the United Aircraft Corporation (UAC) of Russia with which India was supposedly co-developing an FGFA, was still hopeful that India would revive the joint development programme, despite the fact that the Russian FGFA is already flying.

According to the air chief, the IAF would pursue both the LCA MkII and AMCA programme as parallel projects. And in the meanwhile, it will work on concluding the Acceptance of Necessity (AoN) for 114 Medium Multi Role Combat Aircraft (MMRCA), after which the request for proposal would be issued. Since the focus is on MMRCA, the chief made it clear that the IAF will not buy additional Rafales after the ones contracted for are inducted in the service. It will, however, place the orders for additional Su-30MKI.

Another indigenous programme behind which the chief has thrown his weight even before the trials are completed is the Hindustan Aeronautics Ltd built trainer HTT40. “We cannot issue the tender until the trials are complete,” he said. “But if you are asking me whether the IAF will eventually buy it, then the answer is yes we will be inducting it.”

On the mandatory question on China, he said that the infrastructure across the Line of Actual Control (LAC) is not a matter of concern. “While monitoring the developments on the other side, we are also building our own infrastructure,” he said. In a similar vein, he said that the IAF’s role in the ongoing Exercise Him Vijay in Arunachal Pradesh is purely supportive.

“It is an army exercise. We are providing them with whatever support they need. It is not our exercise.”

Given that in the mountains the IAF will have a greater role than the land forces, does he envisage the IAF becoming an integral part of a combined Integrated Battle Group (IBG)?

3 thoughts on “Mind the Gaps”