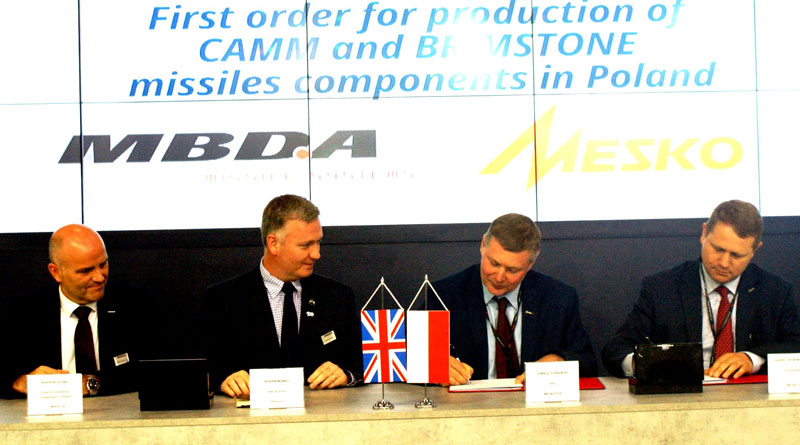 MBDA, the Europe-based missile manufacturer, on September 10 announced it had partnered with MESKO S.A. to bring the Polish firm into its global missile supply chain. The contracts from MBDA to MESKO S.A. were signed at MSPO 2019 in Kielce, Poland.

“The scope of work includes components within multiple missiles including the CAMM air defence missile family and the Brimstone strike missile,” the company said.


“Today’s agreement confirms our capabilities in manufacturing and delivering advanced missile systems. We are now included in the supply chain of components for one of the largest global manufacturers, and we are working on expanding this partnership on other ambitious projects,” vice CEO of Mesko S.A., Gabriel Nowina-Konopka, said.

The contracts between MBDA and MESKO S.A., a PGZ company, follow on from the signing of a strategic co-operation agreement between MBDA and PGZ on missiles in February 2017. Since then, detailed assessments have been undertaken between both parties, which recognise the benefits and strengths of co-operation between each other.

CAMM and Brimstone are also offered to Poland for the Narew and Tank Destroyer programmes. “In addition to global supply chain opportunities, MBDA’s co-operation with PGZ involves unprecedented depth of missile technology and know-how transfer to Polish industry,” said the company statement.