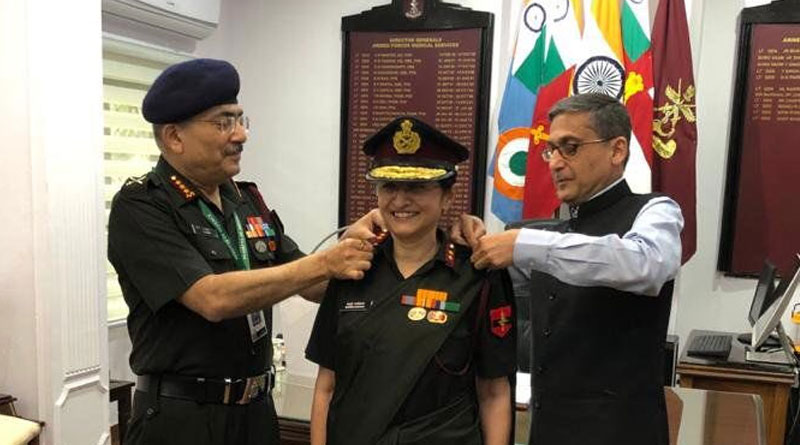 Maj Gen. Madhuri Kanitkar was elevated to the rank of Lieutenant-General on Saturday. She took charge as Deputy Chief, Integrated Defence Staff  (DCIDS), Medical  (under the Chief of Defence Staff) in New Delhi.

She became the third woman in India and first paediatrician from the armed forces to assume this rank.

Lt Gen. Kanitkar was  a topper at AFMC and the winner of the Presidential gold medal for the best outgoing student.  She had secured a post graduated degree in paediatrics and training in paediatric nephrology at AIIMS.

She had returned to AFMC, her alma mater, as its first woman dean in 2017. After completing her tenure there, she was posted to Udhampur’s Army Command Hospital and Major General Medical.


She is also a member of the Prime Minister’s Scientific & Technology (S&T) Innovation Advisory Committee (STIAC).

Lt Gen. Madhuri Kanitkar and her husband, Rajiv, also a Lt Gen., will be the first couple in the history of Indian armed forces to have reached the rank.

The first woman in the country to wear this rank was Lt Gen. Punita Arora. Padmavathy Bandopadhyay, the first woman Air Marshal of the Indian Air Force also became the second woman in the armed forces to be promoted to the three-star rank.