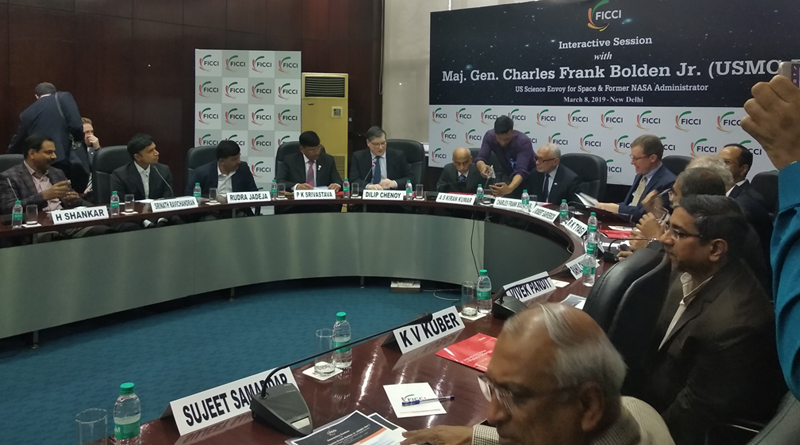 There is tremendous scope for India and the US to work in space missions, and NASA could work with ISRO on India’s first manned mission programme, slated to be launched by 2022, former NASA administrator, Maj. Gen. Charles Frank Bolden Jr said during an interactive session organised by Federation of Indian Chambers of Commerce.

Charles Bolden, who is also the US science envoy for space said March 8 that the US was interested in forming a working group with India to train its astronauts for its Gaganyaan mission.

India is currently in the process of sending the first astronauts to space, through the Gaganyaan mission, for which it has already established a Human Space Flight Centre that will oversee the progress of the programme and train the three astronauts for the mission.

The said the private US companies could assist in training the astronauts for India’s first manned space mission and help selecting them, which requires a much specialised expertise in the field.


However, he said NASA was now outsourcing majority of its work to private contractors, and had taken on the role of supervisor in all the projects. He said, “NASA doesn’t train astronauts. We have contracts. We have been doing this for a long time. If you go to the control centre in Houston today, all flight controllers are SGT (team of contractors). The flight director is from NASA, but that NASA person is supervising a contractor team. Who was preparing the shuttle it was all the United States Alliance people. NASA is relying on commercial entities to operate our vehicles.”

Bolden emphasised that his main responsibility was to encourage international space collaboration and to enhance cooperation between US and Indian scientists and space engineers. He said the US is open to business, and he’s been asked to convey this partner countries.

The interaction was attended by a host of other industrialists and representatives of space-based companies in India, besides the FICCI secretary general, Dilip Chenoy, who presided over the interaction.

The chairman, Physical Research Laboratory, Department of Space (DoS), A S Kiran Kumar, and former secretary, DoS and Chairman, ISRO also said US-India partnership in space has been going on from decades and space agencies of both countries have collaborated on crucial missions.

“Today, one of the major missions where NASA and ISRO is working is almost a billion dollar programme where the Radar Imaging Satellite (NISAR), where JPL (Jet Propulsion Laboratory) makes a portion of the payload and we made a portion of that, and together it’s put on our satellites and it’s expected to be launched around 2020-21. It’s a major mission and collaboration is going in it,” he added.

Kumar said the interaction between US and India is increasing continuously and major partnerships are underway in the field of space. He said the working relationship between NASA and ISRO has been very strong, and now it has taken gigantic dimensions, and in the coming days, we are only going to see it increasing.