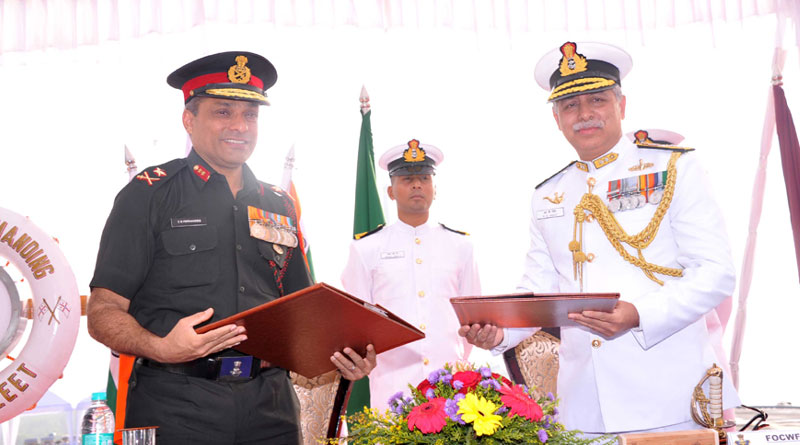 It will foster a deep understanding of each other described in the affiliation motto ‘Victory through Jointness’.

Indian Naval Ship Vikramaditya, the largest ship in the Navy and the country’s only aircraft carrier was formally affiliated to the Bihar Regiment, a highly decorated and battle hardened infantry unit of the Indian Army and the No. 6 Squadron of the Indian Air Force that specializes in maritime strike operations and operates the Jaguar fighter aircraft.

The ceremony was held onboard INS Vikramaditya in the Karwar Naval Base and Flag Officer Commanding-in-Chief, Western Naval Command, Vice Admiral Girish Luthra along with Military Secretary and Colonel of the Bihar Regiment, Lt Gen Amarjeet Singh were the Guests of Honour.


The historic affiliation ceremony commenced with an inspection of the Tri-Service Guard of Honour by senior officers of the three services and the gathering was then addressed by the Flag Officer Commanding Western Fleet, Rear Admiral RB Pandit. In his welcome address, Admiral Pandit spoke of the importance of the affiliation and its relevance in the present day. He highlighted that the idea behind the affiliation was to foster espirit-de-corps and friendship between the three units that would lead to greater synergy and jointmanship. The formal association between the three units commenced with the reading of the ‘Charter of Affiliation’ which  was then signed by the Commanding Officers of the three units and by senior officers from respective services representing the unit.

The ‘raison d’etre’ of affiliation between units of fighting forces is to act as a force multiplier by promoting better understanding of each other’s strengths and ultimately serves to maximise the combat potential of the Indian Armed Forces at the time of reckoning. It also fosters a deep understanding of each other’s service ethos, customs, traditions and sharing of new operational concepts and the same is aptly described in the affiliation motto ‘Victory through Jointness’.