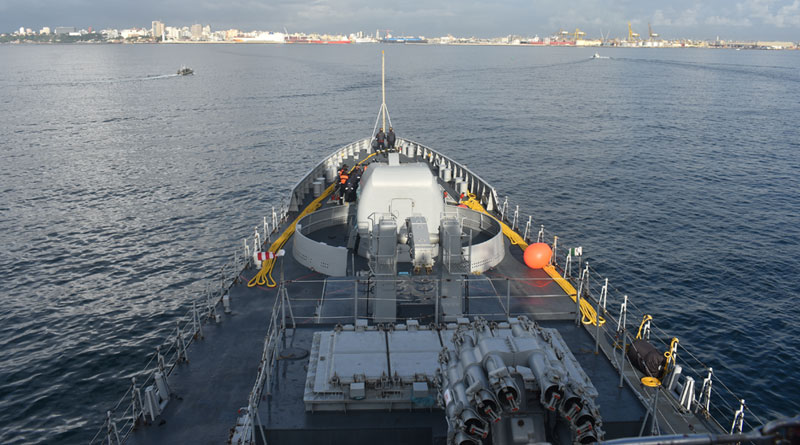 The ship is part of the Indian Navy’s Western Fleet and under the Operational Command of Flag Officer Commanding-in-Chief, Western Naval Command, based at Mumbai

As part of Indian Navy’s overseas deployment to Africa, Europe and Russia, Indian Naval Ship Tarkash made a port call at Dakar, Senegal, on 27 August 2019 for a three-day visit. The ship is part of the Indian Navy’s Western Fleet and under the Operational Command of Flag Officer Commanding-in-Chief, Western Naval Command, based at Mumbai.

“The port call is a demonstration of India’s warm ties with Senegal. INS Tarkash, commanded by Captain Sathish Vasudev, is one of the most potent frontline frigates of the Indian Navy equipped with a versatile range of weapons and sensors,” an Indian Navy statement said.


During the port call, various dignitaries and government officials of Senegal are scheduled to visit the ship. Professional interactions are planned with the Senegalese Navy towards further enhancing co-operation between the two countries. In addition to social engagements and sports event, best practices will also be shared between the two Navies. Tarkash will also undertake a Passage Exercise at sea with ships of the Senegalese Navy on 30 Aug 19, which will enhance interoperability between both navies.

Senegal and India have traditionally enjoyed warm and friendly relations, sharing common values of democracy, development and secularism. A number of bilateral arrangements for defence co-operation and cultural exchange exist between the two countries. The Indian Armed Forces also conduct various training courses for personnel of the Senegalese Armed Forces at Defence Training Institutions in India.