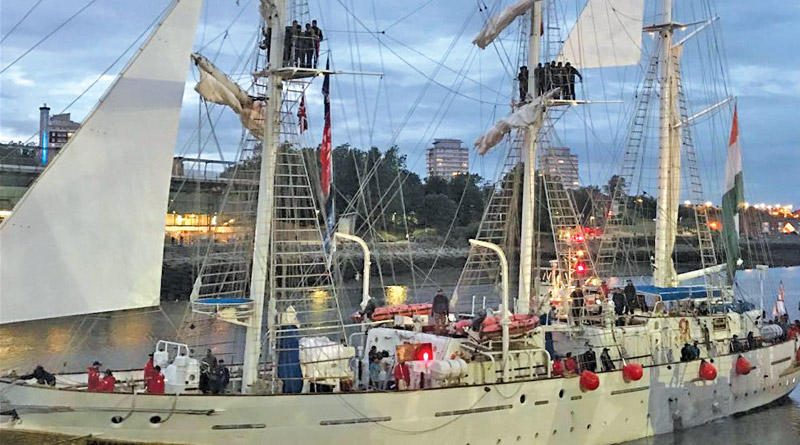 INS Tarangini arrived at her seventh port, Sunderland in the UK on July 13 during her Lokayan-18 voyage and also to participate in the prestigious ‘tall ship races – 2018’. The ship is part of the first Training Squadron based at Kochi, under the Southern Naval Command of the Indian Navy. The name ‘Tarangini’ is derived from the Hindi word ‘Tarang’ meaning waves; thus, Tarangini means ‘the one that rides the waves’. INS Tarangini is the first ship of the Indian Navy to have circumnavigated the globe in the year 2003-04 and has participated in tall ship races conducted around the world in 2007, 2011 and 2015. This beautiful ship, in her 21st year of service, is once again ready to create history with Lokayan-18. Lokayan is a combination of two Sanskrit words, ‘Lokya’ meaning worldwide and ‘Yana’ meaning travel, thus literally meaning, ‘travel around the world’.

INS Tarangini is a three masted ‘barque,’ commissioned in 1997 as a sail training ship for the Indian Navy. She was constructed in Goa, based on a design by a British naval architect, Colin Mudie, it is noteworthy to mention that she has two sister ships in the Royal Navy, STS Royalist and STS Lord Nelson, also designed by Colin Mudie. In fact, STS Lord Nelson will be participating in the Tall Ship Races-18, along with 13 other ships from UK.

INS Tarangini commenced ‘Lokayan-18’ on 10 April 2018 from Kochi, India and is set to cover a distance of over 20,000 nautical miles, with a crew of nine officers, 30 officer sea trainees and 43 sailors. The voyage will take seven months and Tarangini will have the honour of displaying the Indian flag at 15 ports across 13 countries.

Anyone who aspires to become a seaman must begin by acquiring a first-hand knowledge of the wind and waves. It has long been recognised by the Indian Navy that – even in an age of technological complexity – sail training still provides the best possible foundation for a seaman. A sailing ship teaches trainees to work together as a team, and to take decisions under challenging and physically demanding circumstances. It provides an unparalleled opportunity for aspiring seagoing officers and men to develop and exhibit confidence, courage, and sound judgment; precisely the qualities that the Indian Navy needs. The Commanding Officer of Tarangini is privileged to be commanding a ship where he has been a sea trainee in his cadet’s time.