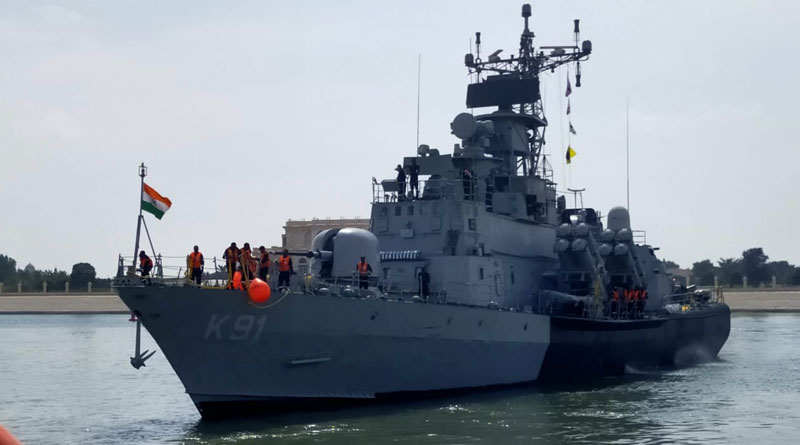 INS Pralaya, the second ship of the indigenously built Prabal Class Missile Vessels, was commissioned in the Indian Navy on 18 December, 2002. The 56 m long ship, displacing about 560 T is capable of speeds in excess of 35 knots and is fitted with an impressive array of weapons and sensors. These include a 76.2 mm medium range gun, 30 mm close range guns, chaff launchers and long range surface to surface missiles. The ship, built indigenously at Goa Shipyard Limited, bears testimony to capabilities of the Indian ship building industry and is a versatile platform capable of performing a wide variety of surface warfare missions.

A press note from the Navy stated, “Participation of INS Pralaya in NAVDEX 21 and IDEX 21, one of the leading international naval and defence exhibitions of the region, is aimed at showcasing the strengths of India’s indigenous ship building, in line with Prime Minister’s vision of ‘AtmaNirbhar Bharat’. In addition, participation of an Indian Navy Ship in NAVDEX 21 and IDEX 21 also highlights close relations between India and UAE.”

Defence relations between India and UAE have been steadily growing since the up gradation of bilateral relations to a ‘Comprehensive Strategic Partnership’ during the visit of Crown Prince of Abu Dhabi Sheikh Mohamed bin Zayed Al Nahyan in January 2017 as Chief Guest at India’s Republic Day celebrations. Towards enhancing interactions between the two navies, inaugural edition of Indian Navy – UAE Navy bilateral exercise GULF STAR – 1 was conducted in March 2018. The next edition of the exercise is likely to be conducted in 2021. In addition, Indian Navy ships have been making regular port calls at UAE for promoting maritime cooperation. INS Mysore, an indigenously built guided missile destroyer, mission deployed in the region, is also making a port call at Abu Dhabi, UAE from 19 to 22 February.