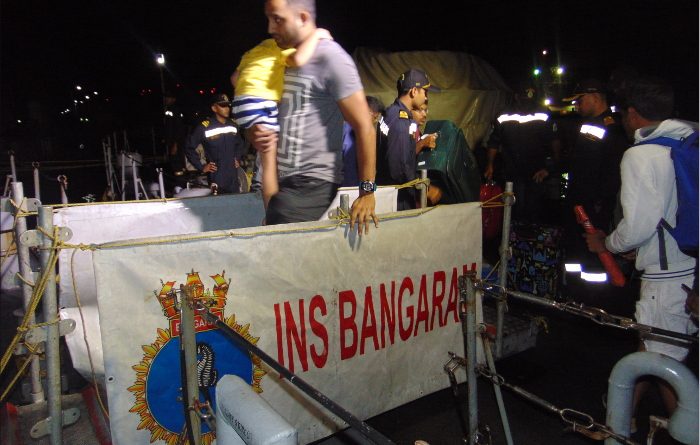 The Andaman and Nicobar Islands have been experiencing heavy rains and resultant rough/ very rough seas since September 13. On September 17, a message was received from civil administration that due to a defect in the hull, the return trip for tourists from Havelock by civil ferry MAKRUZZ had been cancelled. It was also intimated that a number of passengers, who had their flights scheduled for the morning of September 18, were stranded and required to be brought to Port Blair. As the civil ferries do not ply at night to Havelock, Andaman and Nicobar Command had been approached for ferrying the stranded tourists.

Two ships of the Naval Component, INS Bangaram and INS Battimalv (Fast Attack Craft class) sailed for the mission despite torrential rains and very rough weather. Twenty-four civilian tourists (10 ladies, 10 men and four children) embarked onboard INS Bangaram at Havelock and ferried to Port Blair. Additionally, 54 officers from Defence Services Staff College, who were on a visit to the islands and stranded due to cancellation of MAKRUZZ, also embarked on the ships. Thus, a total of 78 stranded personnel were ferried back to Port Blair on the two ships. In the traditional role of support to civil authorities, the tourists were given accommodation inside the ship as the state of the sea was very bad.

On arrival in Port Blair, at about 2230 hrs, the tourists were provided a naval transport to their places of stay in Port Blair. The prompt action by the ANC and the help extended by the ships was highly appreciated by the stranded tourists.