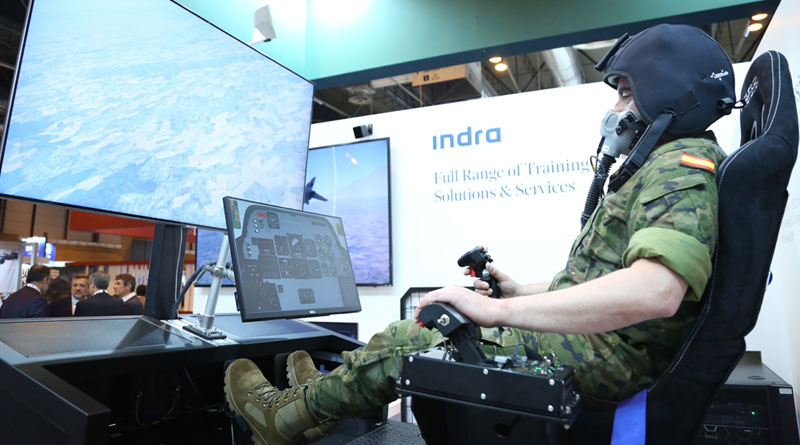 Indra has successfully completed the development of a novel Hypoxia flight trainer that is currently being used to train and provide greater endurance capacity in extreme scenarios to Spanish military pilots.

The Hypoxia flight trainer is already installed in the Aviation Medicine Training Center of the Spanish Air Force in Madrid. This system prepares them to detect in time the effects of hypoxia, a state that can lead to loss of consciousness, while also improving their capacity and endurance, by providing them with an important competitive advantage in combat.

The Flight Trainer-Controlled Normobaric Hypoxia (EV-HNC) consists of a C101 jet trainer – the same one used by Spanish pilots in their initial training, before taking the controls of an F18 or a Eurofighter – and iAltitude normobaric hypoxia equipment, which regulates the concentration of oxygen received by pilots through their mask.

It is one of the few systems available on the market that combines both types of training, which until now were carried out separately. The system is also one of the few that incorporates more advanced functionalities to monitor the physical and cognitive response of the trainee pilot in real time while carrying out a simulated mission.


It measures any change in the physiological variables or the speed of reaction to stimuli with great precision. Thanks to this system, the Aviation Medicine Training Center will be able to design more effective training plans and reinforce the skills, abilities and safety of the pilots.

It will also be able to measure and manage the conditions of all pilots passing through the center in a centralized and unified manner. In this way, the center will prepare them to face a risk that, although it only occurs in exceptional cases, is critical for safety.

Until now, hypoxia training was carried out mainly in hypobaric chambers or in normobaric systems in which pilots could perform some exercises to detect the loss of sensory abilities, but without being linked to flight tasks.