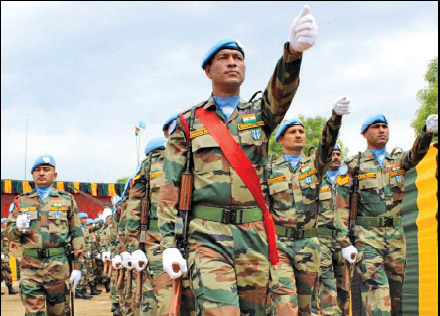 On June 21, 7 Garhwal Rifles Infantry Battalion Group was awarded with United Nations Medal for selfless service in the peacekeeping mission in South Sudan. The parade was reviewed by Deputy Force Commander for United Nations Mission in South Sudan Major General Bayarsaikhan Dashdondog. The ceremony was also graced by a number of military and civil dignitaries, a host of senior commanders of various nationalities.

The two hours ceremony saw immaculate drill parade by Indian contingent led by Major Aman Lamba. In his message during the occasion, Deputy Force Commander Major General Bayarsaikhan Dashdondog complimented the Indian Battalion for carrying out numerous operational tasks with utmost professionalism and dedication to the UN mandate. He further emphasised the legacy of supreme service and sacrifice by the Indian peacekeepers under the UN flag.

“Indian Battalion has played an active and decisive role in ensuring peace and stability in Jonglei state. I congratulate each member of the contingent for being awarded with the UN peacekeeping medal for his service”, remarked Commander UNMISS Brigadier General Mohammed Al Masoom. The Indian ambassador to South Sudan S.D. Moorthy vide email conveyed his deep appreciation for the Indian Battalion and remarked that despite challenging conditions, the personnel of the Indian contingent here have shown indomitable spirit in carrying out their tasks with courage, fortitude and exemplary professionalism. The resolute efforts put in by the contingent have been greatly appreciated by the UN hierarchy. The programme culminated with a cultural extravaganza including a ‘Pipe & Jazz Band Fusion’ and a cultural dance performance followed by the military band.