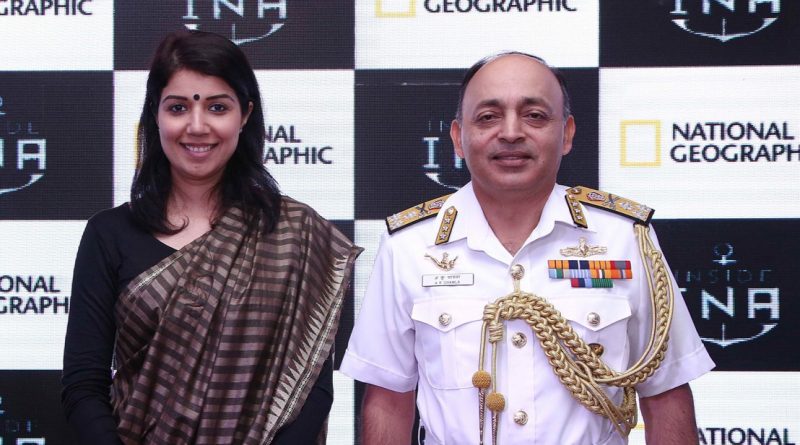 Aditya Kakkar, New Delhi: The official inauguration of ‘Inside INA’, a one-hour long, captivating narrative that captures how the men and women of Indian Navy are trained and moulded into future naval heroes who serve the nation was a spirited affair at Kota house. The trailer of the documentary had already reached four million views on YouTube, when it was formally presented by Vice Admiral AK Chawla, Chief of Personnel, Indian Navy and Swati Mohan, Business Head, National Geographic and Fox Networks Group, India.

Indian Naval Academy (INA), Ezhimala, was inaugurated in 2009 and has a capacity to house 1200 officer cadets which will be subsequently increased to 1700 in Phase II by the year 2020. Vice Admiral Chawla said that while there is a shortage of around 12 percent officers in the Indian Navy, there is a strict selection process which is not diluted and efforts are continuously made to select the right kind of people who are fit to join. The Indian Navy is a growing service and there will be a need to expand. He also reiterated the many benefits of being a part of the armed forces, which is a commitment for life.

“The armed forces is not a profession, it is a brotherhood of arms. There is a sense of camaraderie and life in the Indian Navy is extremely healthy, both physically and mentally. It is a life of integrity,” said Vice Admiral Chawla.

According to Mohan, “‘Inside INA’ underlines our core proposition of showcasing stories, ideas and people that take us Further – through a quest or mission. It has been heartening to be able to showcase the story of these cadets and the next generation of Naval Officers who whole heartedly embrace this very attribute. Combine that with the National Geographic gold standard of storytelling and you get a compelling one hour that will take you through an extraordinary journey.”

A documentary such as ‘Inside INA’ will only strengthen the narrative of patriotism through action and commitment. It will encourage young people from all walks of life to consider the armed forces as a way of life. The movie will also bring forth the many opportunities that exist within the Indian Navy, including but not limited to manning the world’s best ships and defence systems, being aviators and seamen that can rise to any challenge. ‘Inside INA’ will act as a perfect medium to motivate the youth this Independence day.