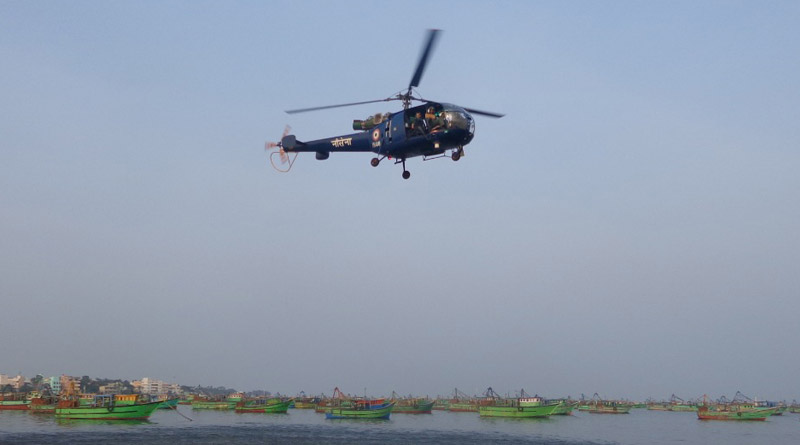 The Indian Navy has sprung into action in the wake of cyclone Gaja in Tamil Nadu and Puducherry. Two naval ships, Chetlat and Cheriyam, arrived at Karaikal in Puducherry this morning carrying relief material and to join the state disaster relief efforts in the state.

While three naval ships – Darshak, Car Nicobar and Cora Divh – are on standby at Chennai, INS Ranvir and Khanjar at Visakhapatnam have been kept ready for deployment if the need arises. A Dornier Detachment has also been deployed at Arakkonam to augment damage assessment and other relief and rescue operations.

The Indian Navy also flew a helicopter sortie from INS Parundu for damage assessment around Ramanathapuram, in the wake of cyclone Gaja, which has reportedly claimed 35 lives so far.


The Indian Coast Guard had already scaled up its operations with pre-emptive and proactive measures to prevent the loss of lives in the seas in the Bay of Bengal, since 9 November 2018. Eight Coast Guard ships and two Dornier aircraft were pressed into action.

Prime Minister Modi, on 16 November, spoke to the Tami Nadu Chief Minister E. Palaniswami regarding the situation and assured full support from the centre. The state government announced a relief of Rs 10 lakh to the kin of the deceased and Rs 1 lakh for the severely injured.

The Tamil Nadu disaster management department on 17 November 2018 said 1,27,448 trees had fallen during the deadly cyclone, and 82,000 people were left homeless as Gaja made landfall between Nagapattinam and Vedaranyan in the state, moving from coastal region to the interior parts of the state.