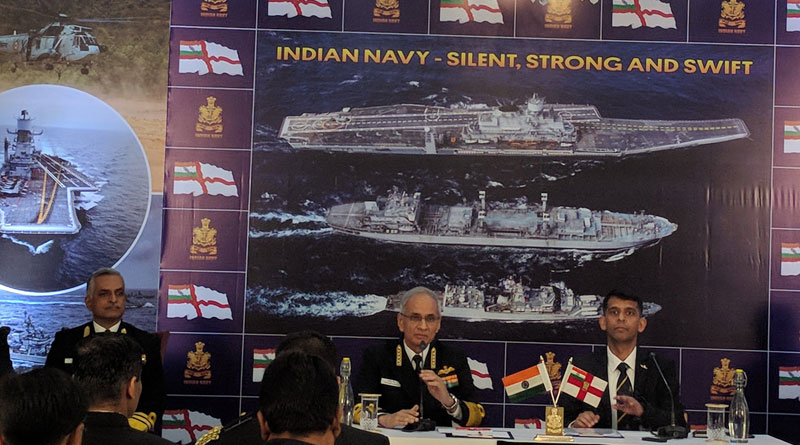 Ahead of the Navy Day, Adm. Karambir Singh says 50 warships and submarines of the Indian Navy under construction of which 48 are on order in Indian shipyards

Addressing an annual press conference ahead of the Navy Day in New Delhi, Navy Chief Admiral Karambir Singh said the long-term plan of the Navy is to have three aircraft carriers. He also revealed that the nation’s first indigenous aircraft carrier (IAC-1) will be operational by 2022, and will be armed with MiG-29K aircraft.

Speaking to the reporters on December 3, the Navy Chief said 41 more ships were in order and the work on aircraft carriers was ongoing. He added, “50 warships and submarines of the Indian Navy are under construction of which 48 are on order in Indian shipyards.”

Commenting on the status of the projects under Make in India, he said that since December 2018, about 88 percent of the Navy’s contracts and acceptance of necessity (AoN) by value have been successfully concluded with, or accorded to the vendors.

The Navy Chief emphasised that the force had been committed to self-reliance since independence, and continues to push for indigenisation in all domains. He said, “Our commitment to this pursuit is seen by the fact that out of 50 ships and submarines currently under construction, 48 are being built in Indian shipyards. These include the aircraft carrier Vikrant, P-15 bravo class destroyers, P-17 alpha class stealth frigates, Offshore Patrol Vehicles and Scorpene Class submarines.”


He also commented on the deal on 24 MH-60R multi-role helicopters, saying the Letter of Acceptance (LoA) from the US was here and the deal is expected to be signed. Answering a question on the naval version of Light Combat Aircraft, he said the arrested landing tests were completed successfully, which was a technology demonstration. He said the Navy was the first to support LCA, adding that the DRDO was pitching the twin-engine deck-based aircraft to Navy.

On the challenges in the Indian Ocean Region, he said India is watching the presence of assets from some countries in the region, including China. He also said that the Indian Navy had thwarted 44 piracy attempts, arrested 120 pirates and escorted 3440 shipping vessels around Aden this year.