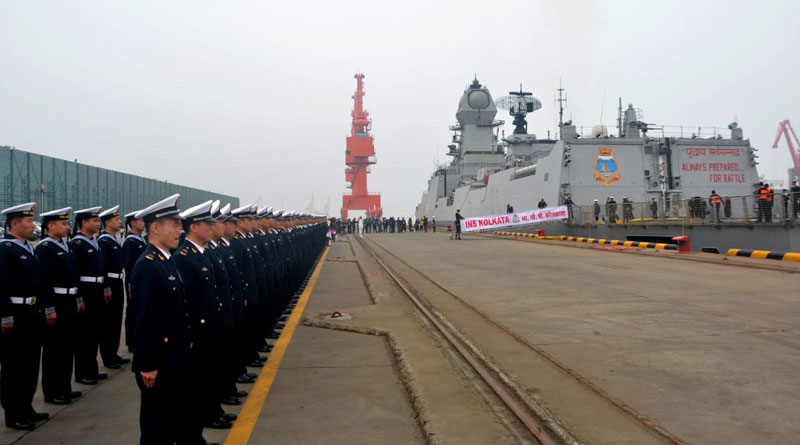 The IFR is being held as part of 70th Anniversary celebrations of Peoples Liberation Army (Navy) which is on April 21.  Entry of Indian Naval ships was marked by firing of 21-gun salute as a mark of respect towards the Peoples Republic of China. The ships were welcomed into harbour by officials from PLA (N) North Sea Fleet. Also, a live performance by a Naval Band was arranged as part of welcome ceremony.

The participation of Indian Navy in PLA (N) IFR, for third consecutive time (2009, 2014 and 2019), is a demonstration of the Nation’s commitment to enhance maritime cooperation between the two navies and bolster bonds of friendship between the two nations.

The Navy has deployed two of its finest assets for the IFR with an aim to strengthen existing cooperation, enhance mutual trust, extend interoperability and build greater synergy to address common maritime concerns among participating navies.


During the stay in harbour, activities scheduled include courtesy calls by various dignitaries of PLA(N), naval band performance and various other functions of IFR including opening ceremony, planning conferences and table top exercise. Indian Navy ships will also take part in the parade of naval ships scheduled on 23 Apr which will be reviewed by the Chinese President Xi Jinping.

Indian Ambassador to China – Vikram Misri will also host a reception onboard INS Kolkata for dignitaries, officers of PLA (Navy) and delegations participating in the IFR.

The IN Ships had earlier docked at Port Cam Ranh Bay, Vietnam for a good will visit prior entering Qingdao. The ships are also scheduled to visit Port Busan, South Korea and Singapore on their return journey to India as part of Eastern Fleet Overseas Deployment.

The Annual Overseas Deployment to the South China Sea is an important tool of Government of India’s ‘Act East’ policy and Indian Navy’s efforts to “Unite Nations Through the Oceans”. Using these overtures, India wishes to extend the “Bridges of Friendship” through enhanced cultural, economic and maritime interactions with countries of East and South-East Asia.