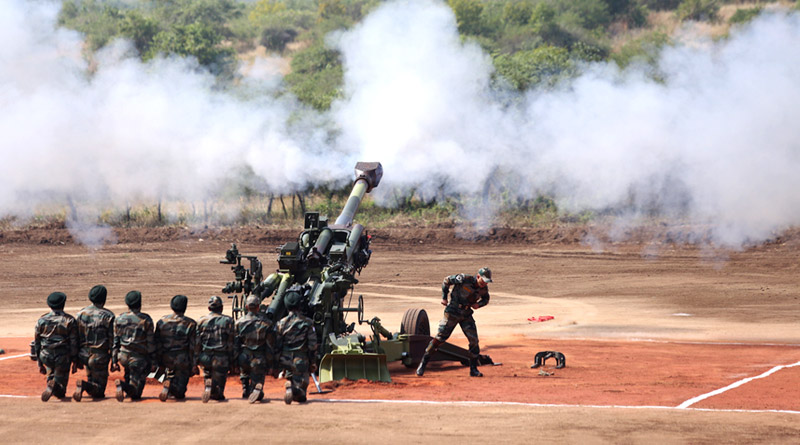 After a slew of successful trials, the Indian Army finally inducted the M777 Ultra-Light Howitzer into its arsenal of artillery guns

The American M777 A2 Howitzer is one of the three major artillery gun systems that were inducted by defence minister Nirmala Sitharaman on 9 November 2018 in Devlali, Maharashtra. The M777 A2 Ultra-Light Howitzer is a towed 155 mm artillery gun system that is substantially lighter than the existing 155 FH 77B Bofors guns and meets the current operational requirements of the borders in mountainous terrains, particularly in Arunachal Pradesh, Sikkim and Central Sector.

India entered into a contract with the United States in November 2016 for procuring 145 M777 A2 Ultra-Light Howitzers via Foreign Military Sales programme (FMS) route. BAE Systems, the manufacturer of the M777, delivered the first 2 units of the ULH in May 2017 for testing in desert and high-altitude terrains. Three more units of the ULH were later delivered to India in late-2017.  The contract with BAE Systems indicates that 20 of the 145 guns will come to India off-shelf in a fly-away condition (two per month will be delivered), and the rest 120 are going to be assembled at facility for the weapon system in India in partnership with Mahindra Defence. The gun will come with laser inertial artillery pointing systems (LINAPS), maintenance, personnel training and training equipment, technical assistance, engineering and logistics support services.


Though procured via FMS, AIT (Assembly, integration and testing facility) established jointly by BAE Systems and Mahindra brings in integration and manufacturing skills. The AIT capabilities will provide not only in-country support to the Army on its weapon system, but also begin the process of indigenous manufacture of modern artillery in India under `Make in India’ initiative. According to the Ministry of Defence, the first regiment (comprising of about 18 guns) of M777s will be equipped by October 2019.

Commenting on the major induction, vice president and general manager, BAE Systems, Joe Senftle said “The Indian Army is receiving an extremely reliable and battle-proven artillery platform. The M777 brings a new level of capability to the artillery unit by offering rapid deployment and extreme accuracy. It can operate in areas that are difficult to access and is also very easy to maintain”

Initially developed for US Marine Corps and the US Army, the 52-calibre M777 has become a benchmark in the 155-mm Lightweight Towed Artillery System. It is already in use in the US, Canadian, Australian armies. The gun is extremely mobile and heli-portable. Though marginally less automated than the existing Bofors guns, it meets the mobility and firepower requirements for the Northern borders.