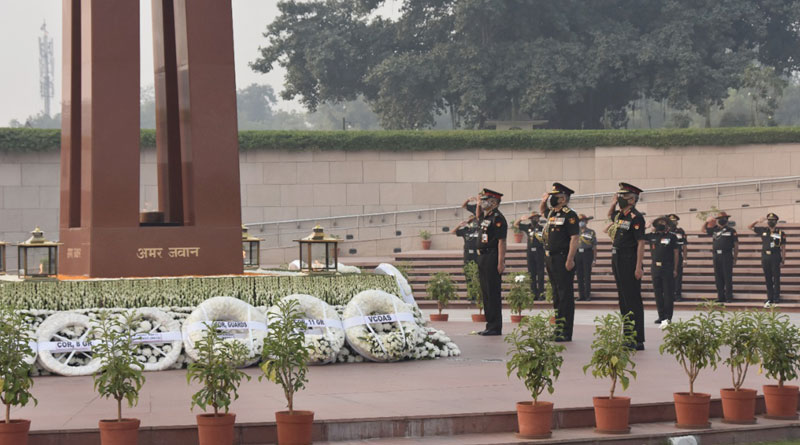 The Indian Army celebrated Infantry Day to commemorate the contributions of Infantry, the largest fighting arm of the Indian Army on 27 October, 2020. This day has a unique significance for Infantry, as it was on this day in 1947 that Infantrymen from Indian Army became the first troops to land at Srinagar airport, an act which turned back the invaders from the outskirts of Srinagar and saved the state of Jammu and Kashmir from a Pakistan backed tribal invasion.

As part of the Infantry Day celebrations, a ‘Wreath Laying’ ceremony was held at National War Memorial to honour the martyrs of the Infantry, who made the supreme sacrifice on various battlefields in service of the nation. Gen Bipin Rawat, Chief of Defence Staff, and Gen MM Naravane, Chief of Army Staff along with all Army Commanders and Colonels of the Regiment, laid wreaths on this solemn occasion. Three decorated veterans of Operation Vijay and Operation Meghdoot Brigadier Umesh Singh Bawa, Vir Chakra (Retd), Subedar (Honorary Captain) Sansar Chand, Maha Vir Chakra (Retd) and Naik Jai Ram Singh, Vir Chakra (Retd) also laid wreaths on behalf of veterans of Infantry. In his message to all Infantrymen on this day, Director General of Infantry exhorted them to rededicate themselves to the core value of bravery, sacrifice, selfless devotion to duty and professionalism, and to remain indomitable in their resolve to defend the integrity and sovereignty of the country.