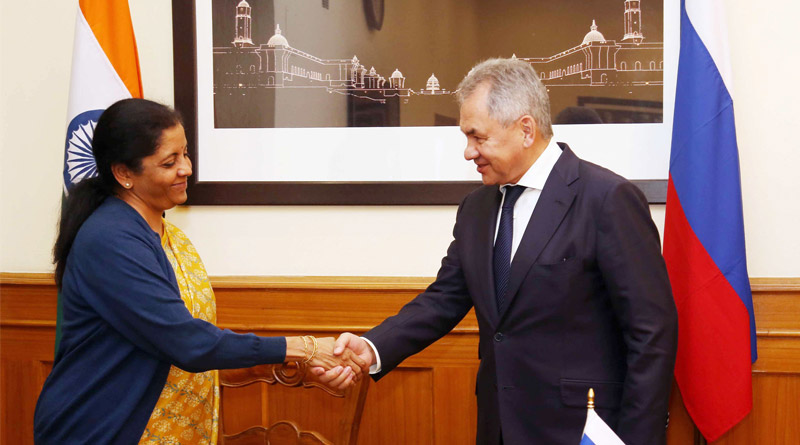 Russia and India, on December 13, decided to sign a major logistics supply agreement during the 18th iteration of the India-Russia Inter-governmental Commission on Military Technical Cooperation (IRIG-MTC) held in Delhi. The defence ministers of the two countries also announced an expanded framework for further military cooperation.


India’s defence relations with Russia have witnessed a noteworthy upward trajectory as of late. Following defence minister Sergey Shoigu’s visit to India, the bilateral ties between the two countries are growing stronger than ever. This year, India not only signed big-ticket procurement deals with Russia but also successfully conducted a plethora of bilateral exercises covering all three services. India is now in talks with Russia to discuss further bilateral cooperation and future procurements. At the meeting, Shoigu said that the level of collaboration between India and Russia in military technology transfer is ‘unprecedented’ and that Russia is keen on further boosting military and technical cooperation with India on a long-term basis.

During Shoigu’s visit, the two countries held discussions ranging from defence equipment to industry and technology engagement between the two countries. The logistics agreement that was given a ‘go-ahead’ in this meeting would allow the militaries to share each other’s facilities including fuel, spares, and services as both countries operate similar platforms in regards to fighters, tanks, and warships. This logistics agreement is very pragmatic as it would also allow both countries to get their equipment serviced, refuelled, and refurbished. A new framework that was green-lit during the meeting will cover the logistics agreement.

The two sides signed a revised Inter-Governmental agreement on restructuring the existing IRIG-MTC. The revised IRIG-MTC will include an additional working group that will be headed by the Chief of Integrated Defence Staff to the Chairman (CISC) and Deputy Chief of the main operational directorate of Russia. Other significant issues discussed during this meeting included the leasing of another Akula-II class nuclear-powered attack submarine for USD 3.3 billion. Following the Chief of Naval Staff’s recent visit to Russia, a high-level delegation from the Indian Navy also visited Russia to inspect the Akula-II class submarines. The Akula-II is expected to replace INS Chakra, which was leased from Russia for ten years in 2011. The two sides also reviewed the status of the government to government agreement under which the Kalashnikov AK-series rifles are to be produced by the state-owned Ordnance Factory Board (OFB). Russia’s offering is the AK-103, a modernised version of the AK-47/AKM rifle that is already in use by the Indian Army, and Paramilitary Forces to be manufactured indigenously. The joint manufacturing of Kamov-226T helicopters, naval frigates, and land systems was also discussed in the meeting. It also included the agreement to simplify export clearances to further joint manufacturing of spares for Russian equipment in India under the government’s ‘Make-in-India’ initiative.

This meeting assumes major significance, as this is the first meeting between two defence ministers since the two countries inked the S-400 deal back in October. The S-400 Triumf Active Missile Defence System (ADMS) is one of the biggest procurement deals signed this year. India signed the USD 5.6 billion despite the pressure of CAATSA from the United States owing to the historical and robust defence ties between India and Russia. The S-400 is a competent and versatile air defence missile system and fares better than other air defence missile systems currently in service around the world. It has been successfully deployed by Russia in Syria and will come as a shot in the arm to the IAF. Other significant deals that were also inked this year include the USD 1.5 billion deal for acquiring 2 Admiral Grigorovich class frigates equipped with BRAHMOS supersonic cruise missiles and the agreement for manufacturing two more frigates at the state-owned Goa Shipyard Limited (GSL). Another landmark deal that was signed this year was for Russian Igla-S Very-Short-Range Air Defence System (VSHORAD) to the Indian Army. The Igla-S system was declared L-1 at the conclusion of the VSHORADS programme. The VSHORADS programme will replace the current Russian Igla-M systems that have been used by the Army since the 1980s

Conclusively, both sides expressed satisfaction over the progress of procurements, as well as the structured engagements between the two armed forces, including joint exercises, and other vital interactions under the framework of the bilateral roadmap on defence cooperation that was signed by the two countries in June 2017.