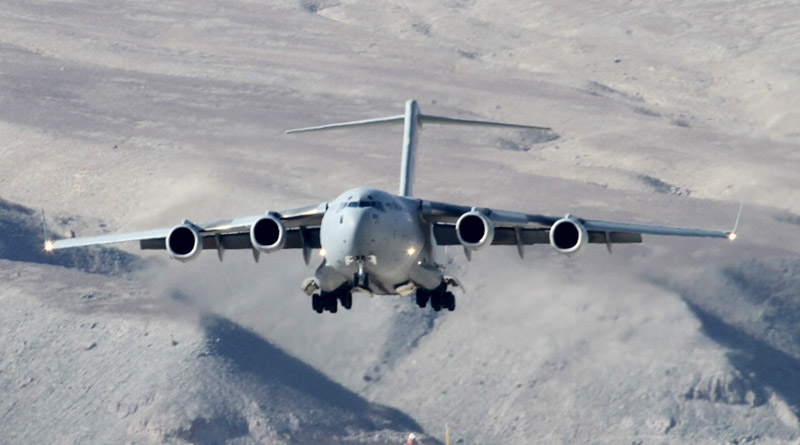 In an unprecedented effort to evaluate its own Rapid Airlift Capability and to enhance crew currency in the role, Western Air Command of the IAF, airlifted a record 463 tonnes of load from its airbase at Chandigarh to airfields and drop zones in the Ladakh region, in a single wave.

The effort was accomplished with the aid of a fleet of 16 fixed-wing transport aircraft comprising of C-17 Globemaster, the Ilyushin-76 Gajraj and the Medium-lift Tactical aircraft, Antonov-32. All the aircraft were loaded and took off from Chandigarh airbase early in the morning. The entire wave was accomplished in little less than 6 hours.


Airlift of approximately 500 tonnes, in the achieved time frame, in a single wave, happens to be a record, which enhances the assessment of the Commands’ capability towards rapid and heavy airlift. The command is entrusted with the air maintenance of the entire northern region of the country and under normal operating circumstances airlifts close to 3000 tonnes of load per month.

“Rapid air mobility is a key component of modern warfare. This assumes greater significance in short and intense wars. This is very true in India’s context, especially when related to air mobility to airfields in the Ladakh region. With a wide spectrum of military transport aircraft in its inventory, the IAF today has a credible airlift capability which has provided succour on numerous occasions when the nation was struck with natural calamities,” Air Marshall NJS Dhillon AVSM, the SASO of Western Air Command, said, under whose direction the effort was achieved.