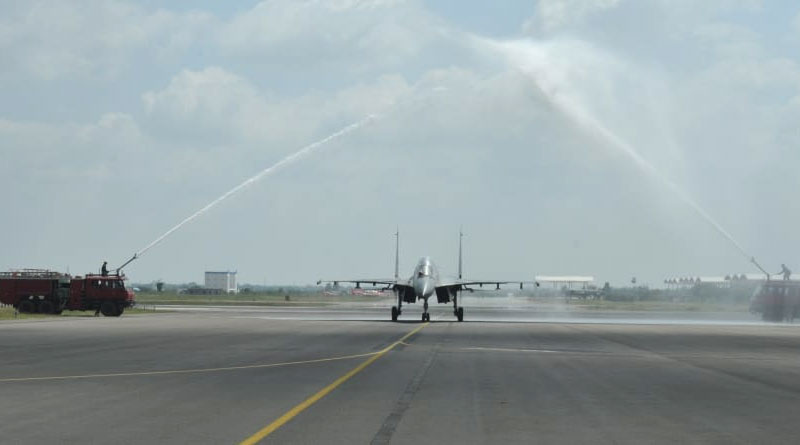 With an eye on increasing Chinese presence in the Indian Ocean Region (IOR), the Indian Air Force (IAF) on 20 January 2020 inducted a squadron of Sukhoi-30 MKI fighter planes, with the capability to carry BrahMos missiles, at its Thanjavur airbase in Tamil Nadu.

The positioning of SU-30MKI Squadron in Thanjavur boosts IAF’s air power as now it has the ability to strike from large stand-off ranges on any target both at sea or on land, by day or night and in different weather conditions.

The supersonic BrahMos cruise missiles have a range of over 300 km.

The induction ceremony of No 222 Squadron, the Tigersharks was attended by Chief of Defence Staff General Bipin Rawat and Chief of the Air Staff Air Chief Marshal R.K.S. Bhadauria among other dignitaries.


General Bipin Rawat in his address said that the resurrection of the ‘Tigersharks’ highlighted the Integration and jointness which is the future of the Indian Armed Forces.

He brought out that Su 30 MKI aircraft along with the BrahMos will be the game-changer which will extensively enhance the security of the maritime domain. “The Squadron will be operating closely with the Indian Army and Navy to get the ball rolling in jointness of the Indian Armed Forces.”

Chief of Air Staff Air Chief Marshal R.K.S. Bhadauria said that it was a “historic day” for the Indian Air Force.

The 222 Squadron which now has been resurrected was first raised in September 1969 at the IAF’s Ambala station in Haryana.