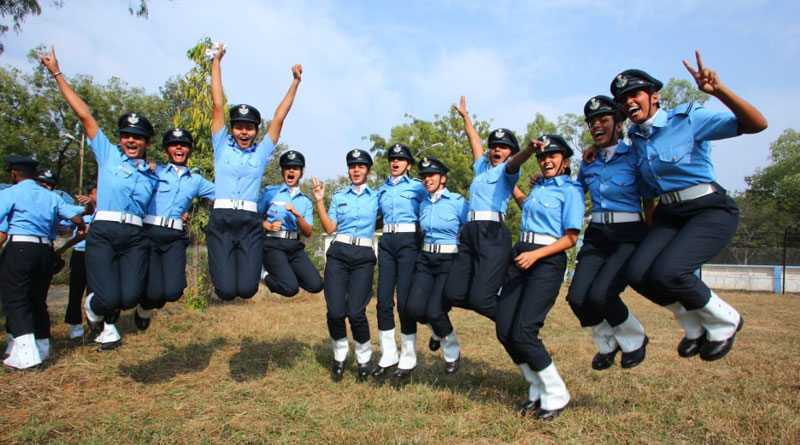 A combined graduation parade was held at Air Force Academy, Dundigal, on 21 December 2019, which marked the successful culmination of training for 127 flight cadets of flying and ground duty branches of the Indian Air Force (IAF). The Chief of the Air Staff, Air Chief Marshal RKS Bhadauria was the Reviewing Officer of the Combined Graduation Parade, where he conferred the ‘President’s Commission’ on the graduating Flight Cadets who successfully completed their professional training.

Twenty-one women officers joined the growing number of women in the IAF. On this day, the President’s Commission is formally conferred on these young and tough air warriors after a long period of rigorous training. The graduation ceremony was undertaken through a smart parade and administration of Oath. The parade commenced with the flag bearing skydivers of the famous Akash Ganga team, spreading the tricolor over the blue skies of Dundigal. The Air Warrior Drill Team once again put up a sharp synchronised performance, delighting the spectators with their handling of weapons. The event was witnessed by the proud family members and friends of passing-out cadets. Several senior serving and retired officers from the three services were present.


The highlight of the Parade was the ‘Pipping Ceremony’, where the Flight Cadets were awarded their ‘Stripes’ (Air Force rank) by the chief guest. They were then administered the ‘Oath’ by the Commandant of the Academy in the presence of the Reviewing Officer and other dignitaries.

Congratulating the passing-out cadets, the Chief of the Air Staff said, “It is a matter of great pride for me to witness this momentous occasion of the Combined Graduation Parade of the Indian Air Force.” He emphasised in his address the importance of core values of the Indian Air Force namely, Mission, Integrity and Excellence and exhorted the newly commissioned officers to uphold these values in professional as well as personal lives. On this occasion, he also conveyed his congratulations to all the proud parents who supported their wards and encouraged them to pursue their dreams.

Aerobatic displays by the Suryakiran Aerobatic Team(SKAT) and Sarang, the Helicopter Display Team held the audience spellbound with their gaze fixed upwards watching a painting being created right in front of their eyes. An impressive flying display by the Pilatus PC-7 trainer aircraft added to the ceremonial setting of the occasion.